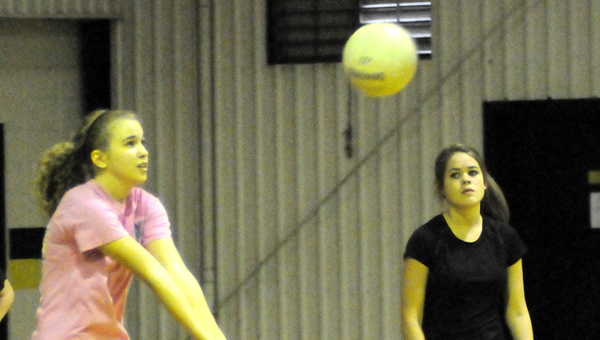 This Saturday the Meadowview Christian School junior varsity volleyball team will travel to Edgewood Academy in Elmore with aspirations to stay perfect and make school history.

The JV girls are 15-0 and will be the No. 1 seed among six other teams in the state’s championship tournament Saturday.

Redd said the team has been able to find success due to composure, teamwork and athleticism.

“The whole team’s real athletic, first of all, especially for young girls their age,” Robby said. “They’re just above what most girls their age are. They also play well together. They lift each other up and they don’t make many mistakes.”

Redd said the state championship would mean a lot to the school.

“I don’t know how long it’s been since we have had a state champion in this school, and there’s never been, from what I understand, a winning volleyball team here that’s gone to the state, junior high or varsity,” Robby said. “So this will be the first time that a Meadowview team has gone to the state championship in volleyball. It would very much elevate the kids and the school itself. It would mean the world to the kids.”

Junior varsity team captains Claudia Kendrick and Jeni Redd are enjoying the ride and hope they can bring home a title.

“It’s really cool,” Jeni said. “Meadowview’s never had a championship in volleyball before, so I think we could be the first ones to be the champions at Meadowview.”

Kendrick said the Trojans have to maintain a level head in order to win it all.

“It feels really cool and we just have to remember not to get big heads about it because if we do, everything can go downhill,” Kendrick said.

“But if we keep a good attitude, I know we can do it.”

Robby said the success at the JV level bodes well for the future of Meadowview volleyball as a whole.

“In the next three or four years, I see the varsity in the same place that the junior high is right now, with the opportunity to go to the state tournament and maybe even possibly winning one,” Robby said.

“There’s a lot of talent, a lot of raw talent, so hopefully I can keep them going and keep them focused on what they seem to love doing — playing volleyball.”