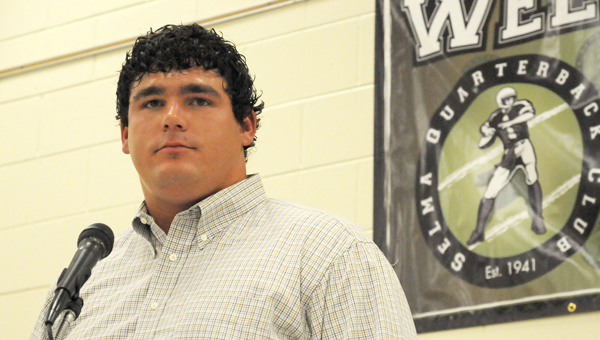 Former Alabama fullback Baron Huber’s life has had a few unexpected twists, but during his speech to the Selma Quarterback Club Monday night, he said he wouldn’t change a thing.

Huber, who was a part of Alabama’s 2009 national championship team, grew up in Knoxville, Tenn. as a diehard University of Tennessee fan. However, when he was not offered a scholarship by his dream team to pursue his goal of becoming a Division I football player, his life and loyalties changed forever. Huber camped at the University of Alabama and was later offered a scholarship.

After visiting the school with his parents, who were lifelong Volunteer fans, Huber said his dad’s reaction caught him off guard.

“He looked back at me in the rearview mirror and said ‘If you don’t go to Alabama, you’re crazy,” he said. “I told them that is what I had been trying to tell them all along.”

Since graduating, Huber said he has had the opportunity to speak to a number of alumni chapters and he most enjoys his appearances because it gives him a chance to show his gratitude for the opportunity he was given.

Huber said he is often asked who he feels is the best running back he blocked for at Alabama. Many are surprised by his answer.

“I’m a little biased, but I always say Glenn Coffee,” he said. “Glenn was a complete back. He was a great pass protector and a tough runner. He could run through you and he could run past you. Mark (Ingram) was a great running back, but Mark didn’t have the breakaway speed Glenn did. Trent (Richardson), who I played briefly with, has it all.”

Huber said he was fortunate to have a supportive family when he decided to pursue his goal, but some are not as lucky. However, he said the community can show interest in a child that has potential and push them to achieve great things.