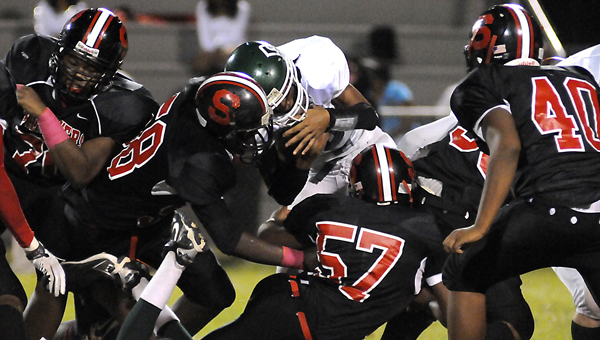 After capturing its first victory of the season, the Southside High School Panthers football team looks to continue its winning ways against a tough opponent Friday night. The Panthers (1-6, 1-4) will travel to Centerville to play the No. 6 Bibb County Choctaws (8-0, 6-0) Friday at 7 p.m. in a region contest. Southside head football coach Bertrum Crum is looking to build off last Friday’s 31-6 win over cross-county rival Dallas County.

“It’s definitely something we can build on, to be able to get a win and have success is always a building point,” Crum said.

Crum said the Panthers have a tough test ahead as they’ll face one of the best teams in Class 4A.

“They’re an old-fashioned, smashmouth football team,” Crum said. “I don’t think they threw the ball more than once last week.”

Crum said the Panthers will try to use a bevy of different looks to try and slow down the Choctaws rushing attack.

“We’re working on lining up in multiple fronts and giving them different looks because they make adjustments real well from what I’ve seen of them,” Crum said. “We’ll try to use some different formations against them.”

Crum said the Panthers will also look to use the Choctaws’ aggressive defense to their favor.

“Offensively, we’re going to try and use their aggressiveness against them, Crum said. “They have an aggressive, attacking style of defense.”

One thing the Panthers will look to continue is a strong passing attack. The Panthers had three touchdowns through the air last week including a 60 yarder, all of them caught by senior receiver Antauris Smith. Crum said the key to a successful passing attack starts up front.

“The main thing we need is pass protection,” Crum said. “When we do a good job of pass protecting, we usually throw the ball fairly decent. If you can’t keep the quarterback upright, you’re going to have trouble completing passes.”