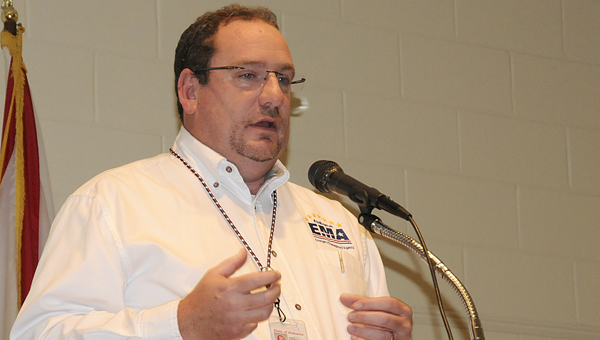 Alabama Emergency Management Agency Region 2 field coordinator Brett Howard spoke to a crowd of Selma Police offiers, firefighters and city officials from across the Black Belt during a first responder/volunteer forum held Tuesday. The forum was to inform officials on how to be prepared during disasters. -- Desiree Taylor

Sponsored by the Selma-Dallas County Citizen Corps Council, the first responder/volunteer forum was designed to prepare public officials and citizens in lieu of April’s deadly tornadoes.

According to news reports, 62 tornadoes ripped through parts of northern Alabama causing $1.1 billion in damage and leaving thousands homeless.

Selma-Dallas County Citizen Corps Council president Jeff Cothran said the devastation was something the state had never seen before.

“It’s important we get community leaders to see what we have in place so as leaders you’ll know there’s a plan in place,” Cothran said. “Let’s figure out how we’re going to respond to stuff before it even happens.”

Several local firefighters and deputies were first responders to the Tuscaloosa area, and were pleased with the unified efforts of volunteers during cleanup.

“I went to the Rosedale area, a restricted area,” said Sgt. David Odom of the Dallas County Sheriff’s Department. “They were really organized … I was really impressed with the show of law enforcement.”

Selma Fire Chief Mike Stokes said the experience was an eye-opening one.

“As you can imagine it was chaotic,” Stokes said. “All in all it was an experience for everyone that went … It’s our hope Dallas County would be ready when and if it happens.”

And with 300 to 600 Army National Guard troops and 12,000 volunteers in Tuscaloosa each day, Alabama EMA Region 2 field coordinator Brett Howard said preparation is key to any city’s quick recovery after any kind of disaster. Howard urges all elected officials to get training on how to volunteer.

“The EMA operations center, the public works, Red Cross and Salvation Army buildings were destroyed,” Howard said. “Forty-three other counties that were hit hard were all grasping for resources … if you can’t coordinate at the command level, these centers helping the citizens will be hurt … cities are responsible for their distribution points.”