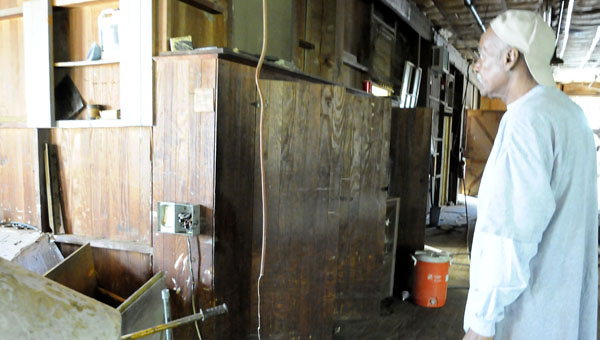 Frank Billings looks over some of the damage to Futura Tuesday. -- Rick Couch

When Futura Companies Limited owner Jim Bunting arrived in Selma Tuesday, he had hopes of getting to work on a $10,000 order for his company. Instead, he found $300,000 worth of damage.

Futura became one of the latest targets in Selma of copper thieves, who stole thousands of dollars worth of equipment and brought the company’s capabilities to a halt by stealing its electrical wiring for scrap copper.

As Bunting walked through the flooded business from a busted water line and took inventory of the damage, he pondered his next move.

Throughout the morning, Bunting continued to find new damage at the building, which made his mountainous recovery effort climb even higher.

“Every time I turn the corner there is something else,” he said. “When you come up on something like this, what do you do? You don’t know what to do. I haven’t a clue of what to do.”

Bunting said he believes the thieves originally came into the building in search of copper, but once they saw the other equipment and heavy steel plating, they realized the value and gathered it up and had a truck come to collect the items.

The company manufactured Futura Stone, which is used for flooring repairs and also  works with as chemical company in Atlanta to produce adhesives used for concrete repairs.

“We were very diversified,” Bunting said.

Among the most expensive losses for Bunting, were filters produced by the company.

Both Bunting and Frank Billings, an employee, said they feel locals who had kept an eye on the building committed the crime.

“They weren’t new to the game,” Billings said. “They knew what they were doing.”

An electrician alone, Bunting said, could cost tens of thousands of dollars because of the unique wiring used at Futura.

The electrical supply for the building was completely cut off and many of the meters were destroyed.

Bunting said he hopes scrap yards will take a closer look at who is bringing items in and the items they are attempting to scrap.

“If a man is working out of a truck, like a plumber, and he cuts pipe too long, he usually keeps that pipe in a bucket,” he said. “When that bucket gets full you take it to the scarp yard and get what you can get.

“When you see these guys coming in their pajamas, they’re bringing stuff where it should be pretty apparent that they are not in the business.”

Billings said he is willing to offer a $5,000 reward for the return of the steel forms that were stolen.

Anyone with information about the burglary can call the Selma Police Department’s secret witness line at 874-2190, Crimestoppers line at 1-800-44CRIME, or contact detectives at 874-2125.