Following another dominating home win, the Keith Bears will look to continue the trend and extend their three-game win streak for homecoming Friday night.

“We’re trying to control it by keeping the players level headed,” Crum said. “Coming off that Southside win they were sky high and the second half they played some of the best football that I’ve been around since I’ve been at Keith. We’re trying to keep them focused on taking care of business.”

Crum said John Essex is a tough team that will play the Bears with a lot of effort.

It’s no secret the Bears are primarily a running team that relies on a Wing-T attack, and that’s not going to change Friday night.

“We’re going to run the football,” Crum said. “Some people may say that’s crazy, that’s absurd and maybe they’ll say it’s insane, but there’s a method to our madness. We realize that’s who we are. We’re a running team.”

Crum said the Bears will also rely on a hard-hitting defense to beat the Hornets.

“Defensively, we play clean football, but we don’t apologize for hitting hard,” Crum said. “Our motto is hit the opponent early, hard and often.”

“We’re 1,000 percent better on special teams then we were at this point last year,” Crum said. 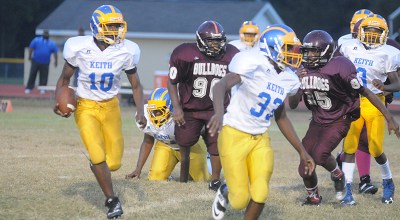