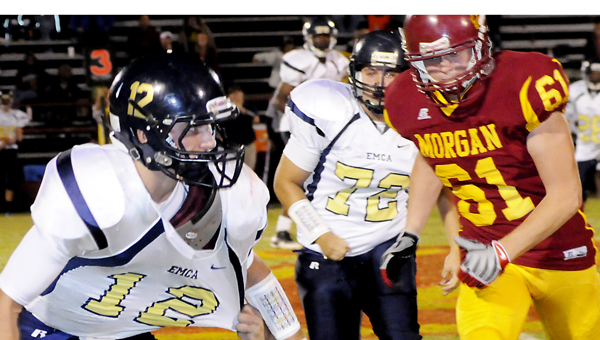 Morgan Academy defenders move in to stop an EMCA runner. The win has Morgan one step closer to the playoffs. -- Dennis Palmer

Hughes, who rushed 22 times averaging 13-yards per rush, did most of his damage in the second half as the Senators wore down the Wildcat defense and held the ball nearly all of the third quarter.

“In the third quarter we didn’t touch the ball but one time,” said EMCA head coach Vic Foxworth. “We couldn’t get Morgan off the field.”

Morgan struck first with 11:48 remaining in the first quarter when Hughes scored his first touchdown of the night on a 30-yard run. McCain Levins added the extra point to close the first quarter scoring. EMCA (2-5, 0-4) answered in the second quarter when Corbin Shaw snuck in from 1-yard out, but the PAT was blocked.

With 1:59 left in the half Morgan scored again after taking over deep in their own territory. Hughes ripped off a long run down to the Wildcats’ 28-yard line, then after an EMCA penalty bolted in from 11-yards out. Levins’ PAT was true giving Morgan the lead at the half.

The Senators (3-3, 2-2) added a safety and touchdown runs by Hughes and Dalton Lee in the third quarter and touchdowns by Levins and Dylan Steward in the fourth quarter. EMCA scored a late touchdown and 2-point conversion to cap the scoring.

“We had McCain Levins back in the backfield tonight,” King said.

“That takes some plays off Parker. McCain does a great job and Dylan Steward is starting to step up and be a (running) back we can use.”

King said it was a “total team effort,” but added having Hughes making plays gives the Senators a huge weapon.

“There’s not doubt Parker made some plays for us nobody else could,” he said. “We’ve definitely got to appreciate the offensive line for making those holes but at the same time he makes some unbelievable plays. He just finds that first down marker and the end zone. We’re just lucky to have a kid like that.”

Next week Morgan travels to Hooper Academy for another region showdown and must win for the Senators as they battle for the third spot in the playoffs.