Our gift to Kenya 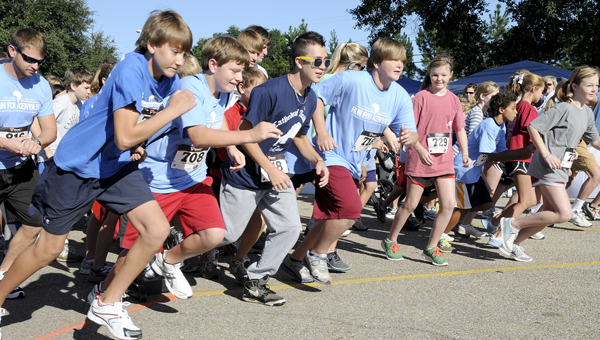 By the time the 5K run started, 191 people had signed up to participating, helping the organization continue their relief and mission work in Kenya.

But for Averee, it was the simplest of gestures that meant the most.

“This little girl walked up to me and gave me $2.12,” Averee said. “She told me ‘I know it’s not a lot. It’s my tooth fairy money. But I wanted to help those children who don’t have enough to eat.’ Isn’t that just awesome.”

The Selma-based Christian organization has spent years in Kenya, primarily near Meto, Kenya, working to provide basic needs, develop simple infrastructure such as wells, building medical facilities and now, focusing on education and feeding those in drought-stricken and education-deprived area.

“Once we get everything figured in, we believe we will have enough money to do 58,333 school lunches at the primary school,” Integrity Worldwide executive director Alan Hicks Jr. said as he stood near the registration table. “That comes to just about seven months of school lunches.”

The school the organization helps has 700 students and is also dealing with the impacts of an ongoing drought.

“What we saw was kids coming to school hungry and then going home hungry,” Alan said, noting the organization has already started providing lunches three days each week. “When we started it with rice and corn, the kids started playing around, playing soccer. You could really see the difference.”

With nearly 200 participants and 45 volunteers Saturday, Alan said the event was a tremendous success and has been surprising.

“Last year, we had about 90 people participate,” Alan said.

“This year, we had far more than that pre-register and you can see how many people came out today to sign-up here.

“We were amazed at the response and so thankful.”