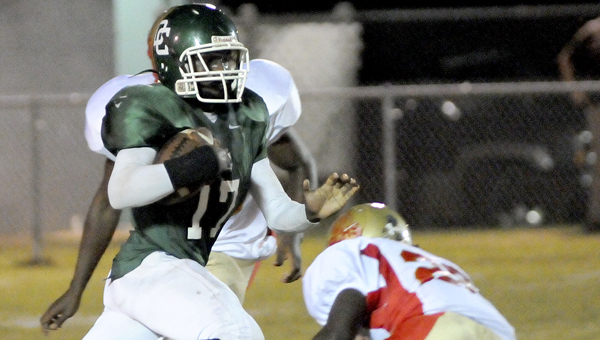 After a tightly contested first quarter, it was the Greene County Tigers who would pull away as they defeated the Dallas County Hornets 54-28 at Martin Field on homecoming night.

“We had good execution on the offensive side of the ball attacking the edges and just getting our ground game going and being efficient,” said Tigers head coach Bruce Jackson.

Hornets coach Willie Moore said the Hornets started off well early, but made too many mistakes.

“We got off to a pretty good start and contained them early on in the game, but then we started missing some tackles,” Moore said. “Little things like that and we turned the ball over early and a little too much.”

The Tigers didn’t take long to strike as running back Charles Powell scored a 37-yard touchdown run to cap off a 5-play 54-yard drive with 9:58 left in the first to make the score 8-0 after a successful two-point conversion.

The Hornets would fight back as they forced a fumble, and two plays later quarterback Sean Van Diver would find J’quan Carter for a 37-yard touchdown pass to make the score 8-6 with 4:03 left in the first. The Hornets would get another big play from their defense as Benjamin York intercepted a Powell pass at the Hornets 1-yard line.

But the big play would be the Hornets undoing, as the Tigers would get a big defensive play of their own when they recovered a Hornets fumbled snap in the end zone to make the score 16-6 after another successful two-point conversion with 10:44 left in the second.

After a Hornets turnover on downs, the Tigers would drive the ball 40 yards as it was Powell again, this time from 6-yards out to make the score 24-6 with 4:11 left in the half. Twenty two of the Hornets’ points came in the fourth quarter.

Van Diver led the Hornets with seven completions on 14 attempts for 151 yards and four touchdowns including another score to Carter, a 53-yard score to York and a 13-yard strike to Trent Salter.

Powell led the 100 yards rushing on 14 carries with three touchdowns. The Hornets will be on the road next Friday when they play Southside High School.

By Emily Beckett The Clanton Advertiser JEMISON — The Jemison Panthers dominated the field in their homecoming and region game... read more