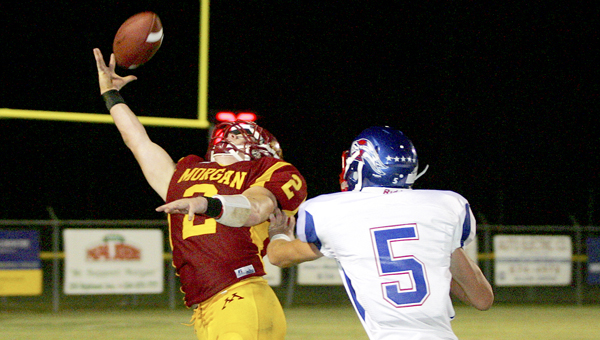 Morgan Academy has relied heavily on senior Parker Hughes this season, but head coach Brian King said it will take a total team effort for the Senators to make a playoff push. -- File photo

With half the season in the books, the Morgan Academy Senators football team is preparing to make a push for the playoffs.

Morgan head football coach Brian King said his team is where it needs to be at the midway point of the season.

“We still need to limit our mistakes, but as far as fundamentals and how we approach it, we’re right where we need to be,” King said. “Like I said before, it’s going to be tough those first five games because every game you play is extreme competition, not that the teams get any worse, just the last few weeks we’re not going to face anyone better.”

King said his team is focusing on winning its next three region games in order to make the playoffs, starting with the Wildcats.

“They’re a real good passing team,” King said. “They pass about 70 percent of the time and their quarterback likes to get on the edge on sprint outs and bootlegs. We’ve got to keep them contained in the pocket.”

After key players such as offensive/defensive lineman Hunter Rogers and running back/defensive back Parker Hughes suffered injuries in the first half of the season, King said his team is now as healthy as it’s been all year.

“We’ve been banged up the last three weeks pretty bad, but this week we’ll be as close to healthy as we’ve been all season,” King said.

In order to tame the Wildcats, King said the Senators will have to win the turnover battle.

“Number one, we’ve got to win the turnover battle and we haven’t won that in the last two weeks,” King said.

“We have to force them to turn the ball over, that way we can still sustain the big drives that we’ve been capable of doing and taking time off the clock.”

Ellwood Christian Academy head coach Mike Stokes said the Eagles’ record does not reflect the progress his team has made.... read more