Moore, Hornets focus on themselves 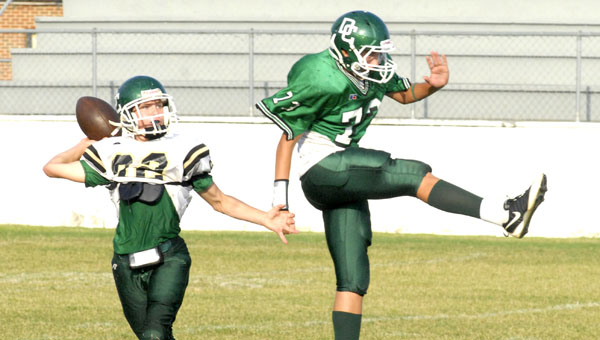 Dallas County High School works on a fake field goal during Tuesday’s practice. The Hornets are still looking for their first win of the season and face another tough task when Greene County rolle into Plantersville Friday night. -- Robert Hudson

Dallas County head football coach Willie Moore said he hoped his team would have had a win by the midway point of the season, but he’s pleased that his team has worked hard.

“I felt like we would at least have a win, but our kids have continued to play hard and we’re pleased with that,” Moore said.

“If we were losing and weren’t playing hard, there would be a serious problem with the discipline, but the kids are showing discipline and they continue to work hard. That’s all I can ask of them.”

Moore said the Hornets will line up against an very talented, athletic Tigers team when the lights come on Friday night.

“Greene County’s got a lot of athletes,” Moore said.

“They’re real good on offense. Defensively, they give you a lot of different looks as far as their fronts and all.

“They’re not real big and tall, but they’re fast and they cover a lot of ground.”

Moore said the Hornets have been focused squarely on themselves and trying to correct the mistakes that have plagued them throughout the first half of the season.

“We’ve been working on the basics like not fumbling the football, taking handoffs properly, route running and form tackling.”

By Robert Hudson The Selma Times-Journal After falling into a two-set deficit and being on the verge of defeat, the... read more