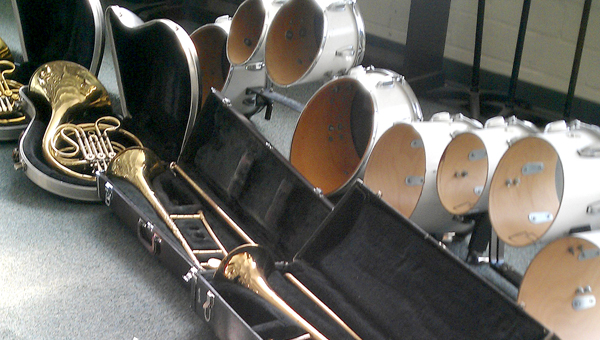 Selma Middle CHAT Academy band is asking for help from the public to help purchase new instruments. Band director Ivan Jones said out of more than 60 instruments the school owns, only 10 to 15 instruments work properly. For more information on how to donate call 874-1675. -- Desiree Taylor

While local bands wow crowds during their halftime performances this football season, one school is in need of the public’s help to ensure it can play its part too.

The Selma Middle CHAT Academy band is in need of new instruments for their upcoming band season. In an effort to help raise money, the band has asked for public donations and has collected box tops to send to Box Tops 4 Education, a program that helps schools across the country earn money for educational programs through the collection of coupons. Box tops can come from hundreds of products including such brands as Cheerios, Kleenex and Betty Crocker to name a few.

A school receives 10 cents for each box top it sends in.

“In October and April we can send our box tops to the Box Tops for Education,” Jones said. “We’ve been collecting tops for two weeks now … we’re nowhere near 30,000, but we’re still striving for Oct. 31. We’re writing letters to businesses in Selma, Prattville and Montgomery. We don’t have as many instruments, (so) the goal here is to raise as much money as I can to get instruments.”

Jones said right now the school currently uses an instrument rental company in Montgomery and parents are paying $35 to $40 a month to rent, which Jones said many parents can’t afford.

“We want every child to have their own instruments instead of sharing instruments,” Jones said. “Some parents don’t see the whole benefit of band yet, (so) hopefully parents will get involved and rent for their child.”

“The instruments are not up to par,” Jones said. “A music company suggested it’s better to buy new ones than to repair the old ones.”

Jones urges not only band members to get involved in the project but also the entire school.

“The box tops alone won’t get all we need,” Jones said. “We’re trying to get some local grants. I would like to have everything to be in place by February, 2012. My goal is to have every student with a new or used instrument in their hand to perform before school is out (in May).”

A graduate of Alabama A&M University and a former band member, Jones said he realizes the importance of having a good music program.

“It’s very important to have up to par instruments,” Jones said. “This is a campaign for the band. I want everyone in the city to know what we’re doing.”

Moore, Hornets focus on themselves

Dallas County High School works on a fake field goal during Tuesday’s practice. The Hornets are still looking for their... read more