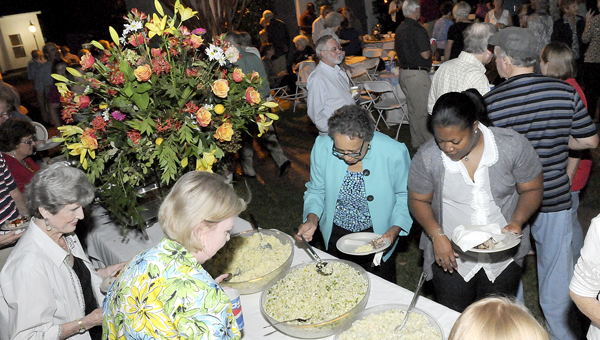 Hundreds turned out for the annual Barbeque on the Green Thursday evening at historic Sturdivant Hall. -- Tim Reeves

Though the final numbers have not been tallied, Thursdays Barbeque on the Green at Sturdivant Hall was another smashing success according to organizers.

Executive director Manera Searcy, who organized the event with co-director Nancy Gantt, said it appeared more people came to this year’s barbecue, which was provided by Golden Ranch, than last year.

“I think we did have a bigger turnout, we definitely sold more tickets than we have in the past,” she said. “We had no food left overs, which is a good and bad thing. We hope everybody had enough.”

“We thank them for their support,” she said.

Despite thunderstorms throughout the day, Searcy said rainy conditions held off during the event, which helped tremendously.

“We were very fortunate that the weather held out for us, and we hope they all had a good time,” she said.

Though planning and executing the barbecue took a lot of work, Searcy said it was worth the effort. All-in-all, she said organizers were very happy with the results.

“We were really, really pleased,” she said.