Stepping back after 41 years 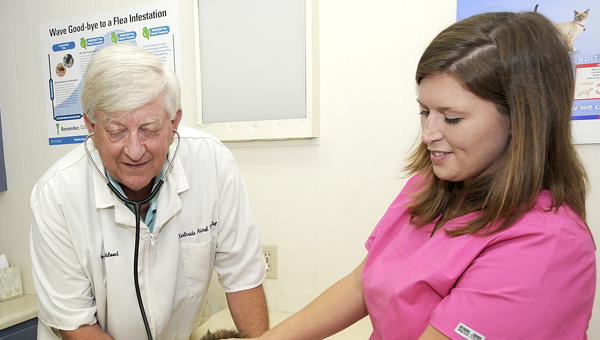 Dr. B.L. Youngblood and nurse Celia Wilson give the office cat Fanny a routine checkup. The story of Fanny’s arrival, Youngblood said, is one of his favorite moments of a 41-year career. Youngblood will be stepping back over the next few weeks to spend more time with friends and family. -- Rick Couch

For more than 40 years, Dr. B.L. Youngblood has been a best friend to man’s best friend and a number of other animals in Dallas County.

Youngblood has been a fixture for 41 years at Northside Animal Hospital, but soon he will take a step back to spend more time with family and working on projects and enjoying some of his favorite hobbies.

Now that most of his family is again settled in Selma, Youngblood said he wants to take a little more time to watch them grow.

“I just decided I wanted a little more time off to complete some projects and be with the grandkids,” he said. “I love being with my grandchildren and being able to go to almost every game and some of the practices and dance recitals. That’s a very important thing to me.”

Most importantly, Youngblood said he would have more time to spend with grandchildren Lilly, Maggie, John Beakman and Cal.

Through the years, Youngblood said he has built relationships with the people that come in and the patients. One in particular is especially dear to the office.

A long-haired calico cat named Fanny has become almost as synonymous to the office as Youngblood. But the cat is more than just a mascot — it’s a symbol of Youngblood’s dedication to his profession and patients.

“I got a call on a Sunday afternoon and one of our neighbors had cranked up their car and heard a thud,” he said. “(The cat) was banged up and I told them I’d give it some pain medicine. I worked on her because I didn’t want to put her to sleep. She looked up at me and I said ‘that cat wants to live.”

Fannny had a broken leg, broken hip and several ruptures, but with a little care, was back on her feet and became a fixture at the office.

“She’s made us a nice hospital pet,” he said.

Relationships aren’t the only thing Youngblood has built. After arriving in Selma in 1970 to work under Dr. Vern Wells, he and his mentor began to build their vision.

“He and I continued to work and add on and our business picked up really good,” he said. “The small animal practice has grown steadily over the years.”

Over the years, the two continued to bring in new equipment and services until Wells retired. Looking back, Youngblood said it is amazing how much the world of veterinary medicine has grown.

“When I got here we didn’t do any labwork at all or any surgeries,” he said. “We’ve managed to get to the point where we are a very modern small animal facility with just about everything you would find in a hospital. I’m very proud of the fact that we have a first-rate, first-class animal hospital.”

Now, as he approaches retirement, the practice will remain in familiar hands as Dr. Wells son Mike will continue the tradition. And, Youngblood said, he will remain on staff to help out here and there.

“I reached the decision that I am going to work Thursday of one week and then Thursday, Friday and Saturday of the next week to give myself a little time off,” he said. “I still will be working a little bit, but I’ll have a little more time to do other stuff. When you are working full-time and you start a project, you might only have one day to do it. Sometimes it would rain on my day off. Now I’ll be able to finish a few more projects.”

Youngblood said he will do a lot more fishing and hunting and will remain at the hospital as long as he can provide a service to the people.