Keith awakens in second half 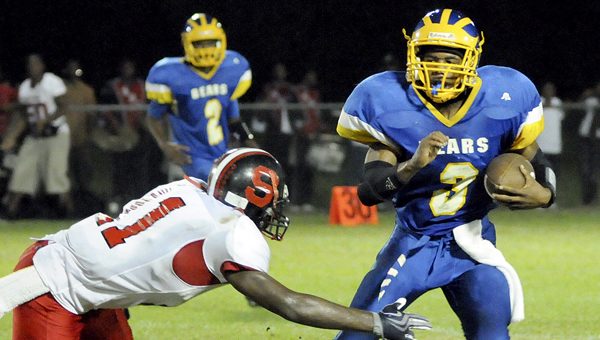 Keith High School’s Rodney Ellis breaks away from a Southside defender during Friday’s 37-7 win in Orrville. The Bears successfully defended their home turf to move their record to 3-2 on the season. -- Tim Reeves

ORRVILLE — As a team, the Southside Panthers racked up 112 yards of total offense and one touchdown Friday against Keith. As a running back, Keith’s Rodney Ellis had 119 yards rushing and two touchdowns by himself.

That was just one glaring statistic that showed the dominance the Keith team held over Southide Friday as the Bears trounced the Panthers 37-7 in Orrville.

“I really believe we were able to wear them down over the course of the game and run at will sometimes,” Keith head coach Harry Crum said. “We’re not going to fool ourselves. We are a running team and that is what we set out to do tonight and we did.”

Overall, the Bears chewed up 297 yards on the ground en route to an easy win over their in-county rival. In the process, Keith moved to 3-2 on the season. With the loss, the Panthers remain winless.

“Right now, we are simply incapable of putting together a full game,” Southside head coach Bertrum Crum said. “ We think when we have some success that we can continue to do that throughout the game. We can’t. Our opponents are going to make adjustments and we have to be able to make adjustments as well.”

Southside got on the board first, scoring on their first possession of the game.

The Panthers attacked through the air on the drive, passing the ball on every down. Quarterback Rajadavia Phillips, who went 4-of-8 on the drive, including a 23-yard touchdown pass to Antauris Smith with 6:14 left in the first quarter led the 9-play, 65-yard drive.

That was the last time they would hold the lead.

On their second possession of the night, the Bears pounded the Southside defense, lining up and running on each of the six plays in their scoring drive.

The 63-yard scoring drive was capped off by Ellis, who raced 40-yards for the tying score with 3:08 left in the quarter.

The two teams would exchange punts and turnover on downs for the remainder of the first half, before Keith’s running attack and hard-hitting defense took over.

In the final two quarters, Southside had minus-12 yards of total offense and just one first down.

Keith on the other hand, was able to score touchdowns on four of their five possessions of the second half.

Starting Bear quarterback Maurice Crumpton, was 1-for-3 passing for 17 yards and one interception on the night, but he did add to the touchdown totals, running one in from just outside the goal line in the third quarter.

Both teams will get back to region play next Friday. Keith will play host to Sunshine, while Southside will travel to take on Jemison. Both games are set for 7 p.m. kickoffs.

Selma High School quarterback Darion Alexander hauls in a touchdown pass for Selma’s only score in a 48-6 loss to... read more