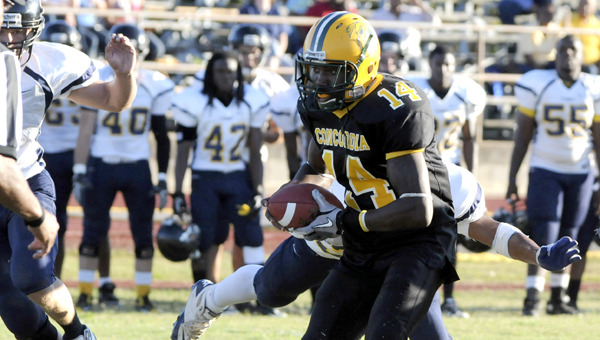 The Concordia College Hornets relied on stifling defense for a 25-0 win over the Point College Skyhawks Saturday at Memorial Stadium.

The Hornets (2-2) forced eight turnovers, including five interceptions, in the shutout win over Point College to bring their record back to .500.

Concordia head football coach Shepherd Skanes said his team was able to play well in all three phases of the game.

“The defense played solid and kept the ball in good field position for us,” Skanes said. “Like I said, you have to play three phases for four quarters, and we did that.”

The Hornets’ defense made its presence felt early when defensive lineman Devon Long stripped a Point College runner and returned in 24 yards to the Skyhawks’ 4-yard line.

The Skyhawks were able to hold tough with a little help from penalties and forced the Hornets to settle for a field goal to make the score 3-0 with 6:11 left in the first quarter.

The Hornets offense would get on the board after a Cornelius Faust 4-yard touchdown run capped off their drive to make the score 10-0 with 4:54 left in the second.

The Hornets were in hurry-up mode late in the second quarter when quarterback Christian Dobbs ran right for a 15-yard touchdown to make the score 18-0 with 0:42 left after Concordia added a two-point conversion.

The Skyhawks would try to answer on the ensuing drive when Hornets defensive back Eddie Cribbs intercepted a Point College pass and took it 36-yards for a touchdown to make the score 25-0 with 0:23 left in the second quarter.

“We had eight turnovers today,” Skanes said. “That was the key to the victory today. We won the turnover battle.”

The Hornets will hit the road next Saturday when they play Edward Waters College in Jacksonville, Fla. at 5 p.m.

The Hornets next and last home game of the season will be their homecoming game at Memorial Stadium on Oct. 8 against Texas College at 5 p.m.