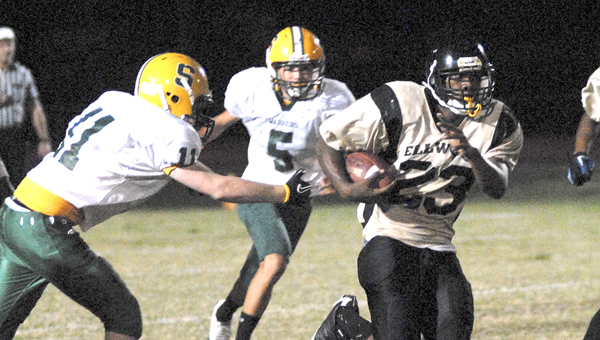 Ellwood Christian running back Deriaun Glenn tries to break free from defenders during last week’s game against Sparta. The Eagles are still searching for their first win of the season as they prepare for a long road trip to Abbeville. -- Robert Hudson

The Ellwood Christian Academy Eagles football team will be searching for its first win at the midway point of the season Friday night.

Ellwood head football coach Mike Stokes said the main thing his team has to learn is to play a complete football game.

“I’ve just got to find a way to get them (the players) to play four quarters,” Stokes said. “We’ll play two, we’ll take off two, but I think what we’re (coaches) doing right now is we’re finally sinking in with them, and it’s been a good week of practice.”

One thing Stokes said will boost the Eagles on Friday night is the return of a few injured players.

Senior running back and linebacker Denzel Smiley will return after sitting out last week’s game against Sparta Academy with an ankle injury.

Stokes said the Eagles will have to contend with a hungry Abbeville team that is also searching for its first victory of the year.

“They’re a lot like us in that they’re searching for their first win and they’re really young,” Stokes said. “They’re the same as we are. They’re going to run a power game at you and try to run it down your throat. They’ve got a big running back there that’s good. From what I’ve seen on film, they’re a good football team.”

Stokes reiterated that his team will have to have a complete performance to defeat the Generals.

“We have to play a whole football game and cut down on mistakes,” Stokes said.

“We have to give a team effort on Friday in order to win that football game.”

By Robert Hudson The Selma Times-Journal The Morgan Academy Senators football team will look to bounce back from last week’s... read more