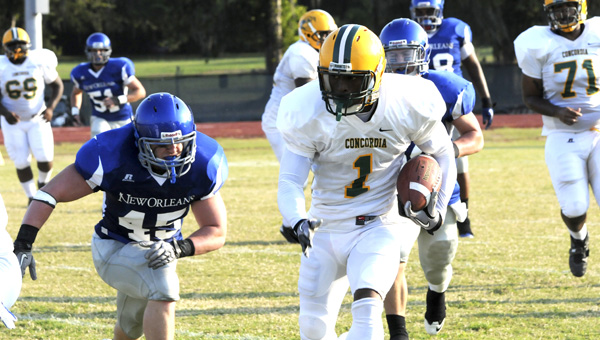 Junior wide-receiver Andrew Harris pulls away from New Orleans defenders During Saturday’s blowout win. The Hornets are hoping for a strong home crowd Saturday to propel them to victory again. -- Robert Hudson

Following a dominating 57-19 win over New Orleans in its home opener, the Concordia College Hornets football team is looking to repeat that performance Saturday.

The Hornets (1-2) will be home at Memorial Stadium when they play Point College on Saturday at 5 p.m.

Concordia head football coach Shepherd Skanes said Point College is a dangerous opponent that reminds him of another team he’s very familiar with.

“Point College reminds me of Concordia College from 2005 when we first started our program,” Skanes said. “Everybody was underestimating us and we went in there and got a lot of upsets … we ended up 7-3. I think there’s a similar thing going on with them.”

Skanes said his team came together after losing the first two games of the season and got a boost from playing at home. He hopes the Hornets can carry that over to Saturday.

“I want them (the players) to come with that same enthusiasm,” Skanes said. “I want to see more chemistry and them come together more.”

Another thing Skanes did to get his team back on track was go back to the basics in practice and did things as if the team was in fall camps again.

“We went back to camp and started drilling them like we were in camp,” Skanes said. “We did stations, bag drills and Oklahoma drills. We stripped everything down and went back to the basics.”

In order to continue their winning streak, Skanes said the Hornets will have to continue the strong play it displayed offensively, defensively and on special teams against New Orleans.

Dallas County looking for a win