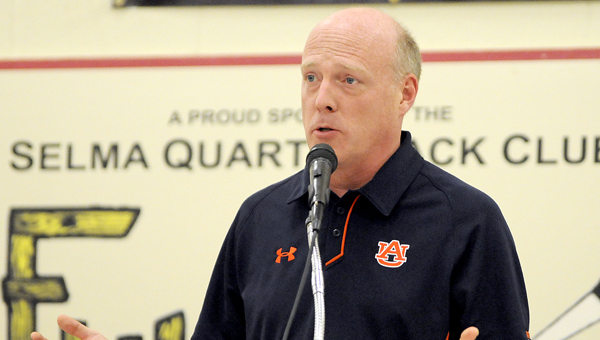 Bramblett, a 1988 Auburn University graduate, said the Tigers have a number of underclassmen and first-year starters at crucial positions.

“(Saturday) was a young team going on the road and not knowing how to respond,” he said. “I’ve heard the argument that Clemson was just as young as Auburn but there is a big difference. This is an Auburn team that over half of its roster is either freshmen, redshirt freshmen or sophomores.”

Auburn, he said, has only four seniors on the team and only two are starters.

Last season, he said Auburn had 23 seniors, which is a solid number.

“Those are guys these younger guys don’t have,” he said. “They don’t have that older guy to grab them by the shirt collar and shake them and say ‘this is how you tackle.”

As players gain experience, Bramblett said, things would come together.

“Auburn is in great shape,” he said. “They are suffering right now but they will be fine.”

The combination of talent and leadership on the 2010 team, Bramblett said, is what makes championship seasons.

“Last year was awesome because you had the perfect storm with so many seniors, and then you had Cam Newton and Nick Farelly and the schedule. All of that just worked perfectly, which is what happens with every championship season.”

“This year could be a little bit of a roller coaster ride,” he said.

During his visit, Bramblett also discussed another hot topic in conference expansion.

A school very few have mentioned could be a dark-horse candidate.

“I think Missouri would be awesome because you get St. Louis and Kansas City,” he said. “Let’s be honest, it’s all about money.”

The key, Bramblett said, would be aligning a 14-team conference in a way that would keep Alabama and Auburn in the same division.

Selma quarterback Darion Alexander (10) runs the ball in the second quarter of the Central vs. Selma football game in... read more