Sumter too much for Southside 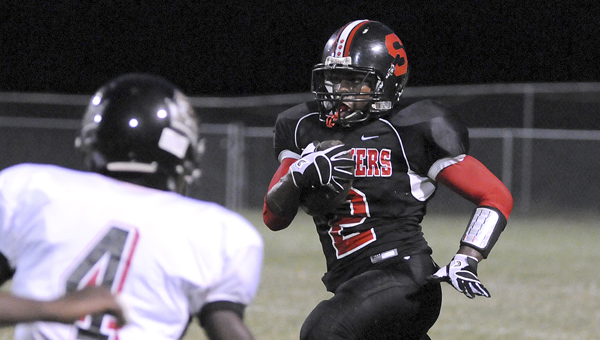 Above, Southside Panther wide receiver Zollie Glover returns a kickoff during the Panthers matchup against Sumter Central Friday in Selma. Sumter Central cruised past Southside, winning 60-0 to improve to 3-1 on the year. Below, the Sumter Central defense made it difficult for Southside to find running lanes all night. -- Tim Reeves

If that’s what Pickering wanted, that is exactly what he got as his Jaguars throttled the Panthers 60-0. And, it wasn’t that close.

The Jaguar defense itself scored a touchdown on the evening, while holding the Panthers to just 37 yards of rushing offense and less than 200 overall.

“We feel like we have a good football team, and last week we went into Greene County and felt we were on the short end of some bad calls,” Pickering said. “So we told our players we want to continue to get better and better. And, for that reason, we looked to come in here trying to dominate this game in all areas. We want to do that each and every week.”

The Jaguars (3-1, 2-1) will now have two weeks before they take on Bullock County in another regional battle.

“We know Bullock County has a good team and we want to focus on getting ready for them over the next two weeks,” Pickering said.

Against Southside, the Jaguars dominated the game from the beginning, scoring on their very first possession and then piling on as the game continued.

Sumter Central scored 14 in the first quarter, 21 more in the second quarter, 13 additional points in the third quarter and then just 12 in the final quarter.

Starting quarterback Roderick Harris, who accounted for six touchdowns and six extra points, led the Jaguars offensively. He had 159 yards rushing and two touchdowns, while he had 273 yards passing with four additional touchdowns.

On the night, the Jaguars had 652 yards of offense.

Three of those touchdown passes went to LeeOtis Washington, who finished with 160 yards receiving.

As for Southside, their season under first-year head coach Bertrum Crum, continues to be a struggle.

Now, four weeks into the season, Crum is beginning to grow frustrated with his team’s lack of growth.

“Our kids are capable of playing at a high level,” Crum said. “But, when they get on the field they start second guessing themselves. At the level we are trying to compete at you cannot second-guess yourself. If you do, then you will get beat.”

Crum also the Panthers have to start playing with a sense of purpose or the winless start to the season just very well might continue.

“For some reason, we play like someone owes us something,” Crum said. “No one is going to give us anything.

“In the game of football you have to take what you want. And if you don’t do that, then you get taken. That’s what happened here tonight. We got taken.”

Southside (0-4, 0-3) will next travel to Keith for to take on the Bears in an intercounty rivalry.

Ellwood running back Denzel Smiley tries to hit the corner against Sparta Friday night. The Eagles are still looking for... read more