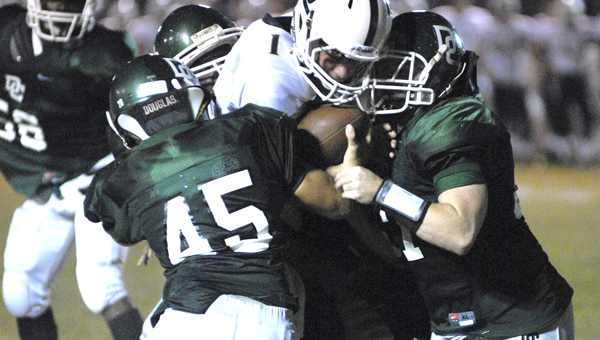 Dallas County High School hopes sure tackling and less mental mistakes will lead to a win over Holt Friday night in Tuscaloosa. The Hornets and Ironmen are still looking for their first victory of the season. -- Robert Hudson

It’s been a rough start to the season for the Dallas County High School Hornets football team, but it’ll look to reverse its fortunes Friday night and capture its first win of the year.

Dallas County head coach Willie Moore said both teams will be fighting hard for their first win of the season, and the Hornets are working hard to come out on top.

“Both teams are 0-3, so somebody’s going to get their first victory,” Moore said. “I’m just hoping that we go up and be able to be competitive … to be able to give ourselves a chance to be in the ball game in the fourth quarter. That’s our goal.

To be in the game the fourth quarter and to have the opportunity to win.”

Moore said, despite Holt’s record, the Ironmen are an athletic team that sports a dynamic duo on offense.

“They’re very athletic and they’ve got a big quarterback and athletic receiver,” Moore said. “Both of them are Division-I athletes. We’ve just got to do a real good job of trying to contain them because once they get outside or get into the secondary they can take it to the house. We’ve definitely got our hands full with them this week.”

Moore said the Hornets have been working on the fundamentals in order to prepare for Friday night’s game.

“We’re just working on trying to be consistent, working on ball security, the fundamentals of tackling and blocking,” Moore said.

“We’ve been doing a really good job of beating ourselves, even though the last two teams we’ve played have been pretty good, we’ve not helped ourselves as far as making mistakes and turning the football over.”

Moore also said the Hornets need to play solid offense to help out their defense.

“We’ve just to got to try and be better at managing the game as far as when we get the ball, try to sustain some drives, pick up some first downs, so our defense is not on the field quite so often,” Moore said.

“We’ve just got to not be so self destructive, and we’ve been that for the first three ball games.”

Friday’s game will also mark Moore’s return to the sidelines as he missed last week’s game against Bibb County due to his mother passing away early last week.

By Robert Hudson The Selma Times-Journal With registration complete and practices underway, The Selma youth soccer season is set to... read more