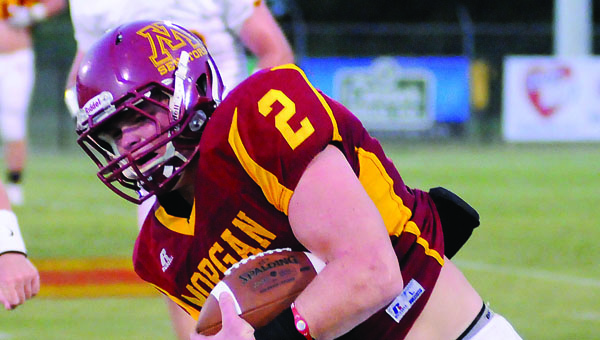 Morgan Academy head football coach Brian King said he hopes to have another strong showing from Parker Hughes and the rest of the Senators Friday when they head to Edgewood. King said the team must cut down on mistakes. -- Don Coffee dcgraceimages.com

The Morgan Academy Senators football team will be looking to extend its two-game winning streak when it travels to Elmore Friday night to play the Edgewood Academy Wildcats.

“They’re a big-play team,” King said. “They’re real good at special teams, throwing it deep and getting it to their athletes on the edge. Our biggest plan is to try to contain them, stop their big plays and force them to have to drive it.”

King said Edgewood will employ multiple looks to attack the Senators, and the focus in practice has been matching up against the Wildcat multi-faceted attack.

“We’re working on throwing all kinds of different sets at them (Morgan players), a lot of spread stuff, multiple formations and just knowing how to adjust to trips and motion out of it,” King said. “They (Edgewood) throw the world at you as far as the playbook goes. We’re basically working at defending everything including I-formation, spread and trips.”

King said the Senators will have to play disciplined, mistake-free football in order to win the game.

“We’re going to have to have fewer penalties,” King said. “We’re still making the small mistakes and the mental mistakes that are affecting our offense and defense. We’ve also got to hold on to the football and win the turnover battle.”

King said the status of lineman Hunter Rogers, who left last week’s game against Macon-East Montgomery Academy with a knee injury, will be a game-time decision.

Panthers learning on the go

The Southside High School Panthers are hoping this is the week they can break through with their first win of... read more