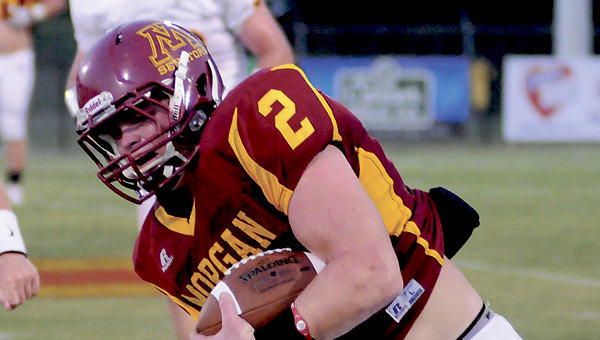 Coming into their first game of the season, Morgan Academy head coach Brian King knew what to expect from visiting Tuscaloosa Academy — a wing-T offense and plenty of it — and that’s exactly what his Senators got as the visiting Knights came away with a physical 21-7 win over their Region 2 rival.

Although Tuscaloosa may have been more physical, the Senators didn’t do themselves any favors racking up huge penalty yards and missing several defensive opportunities to stop Knight drives, including one in the first quarter when two Morgan players watched a Knight fumble bounce pass them. Tuscaloosa was able to recover, leading to a short touchdown run with 5:48 left in the first quarter to go up 6-0. The extra point attempt failed.

Morgan responded after the score with a long drive culminating with Parker Hughes, who split time at running back and quarterback, taking the ball in around right end for a touchdown. McCain Levins’ extra point was good, giving the Senators a 7-6 lead.

Morgan held on defense, getting the ball back but Hughes fumbled on Morgan’s 41-yard line. The Knights took advantage of the miscue going on a 5-play drive capped by Brooks Adams rumbling in from 4-yards out for the touchdown. The Knights converted the 2-point try to take a 14-7 lead into the half.

Morgan had its chances in the third quarter, including a fumble recovery by Levins and an interception by Hain Beers, but couldn’t covert any points off the turnovers.

Tuscaloosa sealed the win with a late touchdown run by Adams with 4 minutes remaining in the fourth quarter.

“I just didn’t get us prepared good enough,” Senators’ second year head coach Brian King said. “Being a region game it was definitely important for us, but we’ve got a lot of games left. We’re going to come back better than ever next week, work on our mistakes and see what we can do to have a great season.”

Graduation and transfers took a toll on the Senators this year and King and his coaches have had to work with limited numbers.

“As a team we’ve got to get stronger. I’ve got to get them in better shape to be able to handle playing both ways,” King said. “Our whole team plays hard, you saw that tonight, nobody gave up, nobody quit.  We kept looking for answers and they just weren’t coming tonight.”

Hughes led the offense with 13 rushes for 55 yards and one touchdown and went 2-for-5 passing for 25 yards. Levins rushed for 26 yards on four attempts and had one reception for 18 yards.

Matt McKinney led the Senators on defense with eight tackles, with Hughes and Trevor Bates each having six tackles and Dylan Steward with five tackles.

Morgan travels to Prattville Christian next week for another Region 2 battle, while the Knights travel to Greensboro to take on Southern Academy.