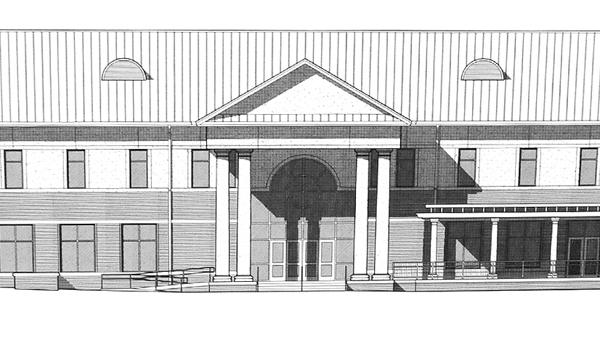 Above is an artist's rendering of the planned student services building at Wallace Community College.

An Aug. 30 groundbreaking at Wallace Community College will be the first step in a project that is creating quite a bit of buzz.

Construction will soon begin on the new student services building, which dean of students Donitha Jones Griffin said, will simplify many of the processes new students go through.

One of the biggest assets of having a student services building, Griffin said, is its ability to create a centralized location for new students to take care of several issues at once.

“We are pretty excited because this will allow us to put things like admissions and financial aid and the bookstore in the same building,” she said. “It will also give students a place to hang out.”

“Whatever services students need will be in that one building,” she said.

Another possible addition to the building could bring excitement to students and residents of the Black Belt alike. Griffin said the college is negotiating with Barnes and Noble to place a book store in the building that would have a coffee shop and would be open to the public.

Griffin said the school is very excited about the possibilities the new building will bring.

“We’re really proud of that building,” she said. “We understand that most of our students that come back are students that feel like they have a real connection to the college.

“We feel like this building is going to give students a new connection outside of academics.”

The building will be constructed by First Team Construction of Auburn and is expected to cost between $7 and $8 million. Funds were already set up through the school to finance the project.

Plans for the building were discussed when enrollment numbers continued to rise, Griffin said.

“We had been talking about it because enrollment was increasing and we really saw where students were getting confused with the process,” she said. “More than 50 percent of our students are first-time college students, meaning neither of their parents went to four year schools, so it can be kind of difficult to maneuver. We realized we needed to have all this under one roof.”

A timeline for the project has not been established.