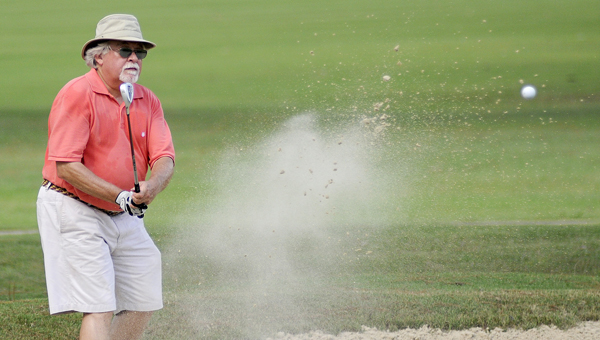 Barry Stapp hits out of the green-side bunker on No. 13 during the second round of the Selma Country Club Championship Sunday afternoon. -- Tim Reeves

Sunday, the 64-year-old golfer, who has won “10 to 15” Selma Country Club Championships when he was “younger,” needed just one putt to claim the title once again.

“I was able to hit a 20-foot putt on the last hole to win it,” Blanton said Sunday afternoon at the Selma Country Club’s clubhouse. “I don’t remember the last time I won it; maybe 10 to 12 years ago.”

Blanton shot a two-day score of 141 to win the tournament by one shot over Will Pearce, Blanton’s playing companion on Sunday.

The club championship title is the only one of the weekend to be decided on gross scores, meaning the actual number of shots hit, using no handicaps.

With the handicaps included, Pearce will be listed as the winner of the Championship flight, with Blanton coming in second.

David Cothran came in third in the championship flight with a net score of 144 for the two days.

Defending men’s champion Paul Garner finished tied for fourth in the championship flight along with past club champion Andy Stewart.

Johnson, with a net score of 136 over the two days, also won the senior’s title, defending his 2010 title.