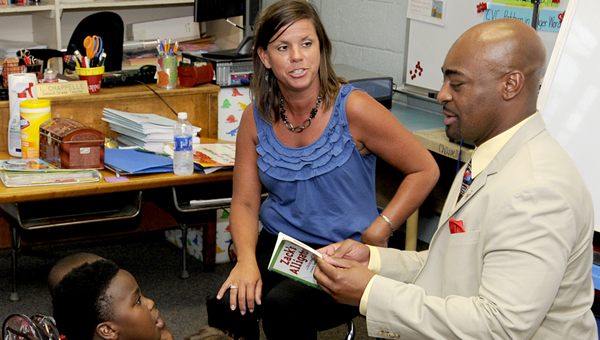 For more than three decades Dr. Donald Jefferson, Selma City Schools superintendent of education, has seen plenty of first days of schools. And you would forgive him if he didn’t show the excitement or enthusiasm of someone with less experience.

Such is not the case with Jefferson.

“To me, this is a day I look forward to every year,” Jefferson said. “I can’t tell you how it makes me feel to see these students come to school each and every year.

“I know that each of them is an opportunity to affect the life of a child.”

Although official attendance figures were not available Monday, Jefferson said attendance appeared to be a little lower than last year, but he expected that figure to rise over the coming days.

“We always see a few come in over the first week,” Jefferson said.

At Byrd Elementary, school principal Beth Taylor spent the morning on the sidewalk in front of the school, welcoming each of the students and their parents back to another school year.

“We are really excited,” Taylor said. “It’s always nice to start off the school year and to see all the children again.”

Jefferson said he was pleased with his staff’s work over the past few months getting everything in order for the first day, and it showed Monday.

“I had the opportunity to go out to each of the schools today and was happy to see all of the work done over the summer was done and looked good,” Jefferson said, noting the new carpet at a few of the schools as well as repainting efforts at others. “Everything was real clean and shiny today.”

Ellwood Christian also welcomed students back Monday, but messages left by the Times-Journal were unreturned.