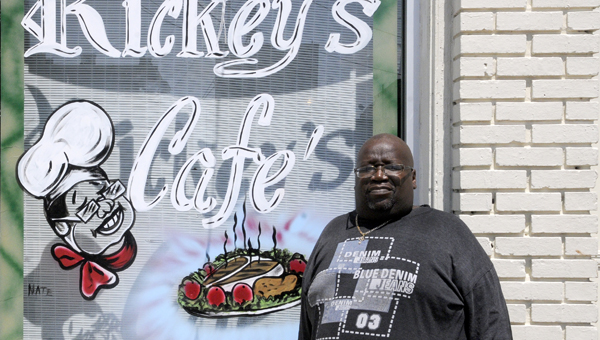 An old, local restaurant is now running under some new management.

Located on Washington Street, Richard’s Cafe is now Rickey’s Cafe and has a new owner; Rickey James. James, a former part owner of Mama’s Kitchen and Grill, became owner of the restaurant on June 10.  After becoming owner, James made a few changes to the menu.

“We offer more vegetables, soul food, salads and desserts,” James said. “A lot of people who’ve come here tell me they’re glad I’ve come in and made these changes and brought in food they can have a variety of choices on.”

Rickey’s is now open at 11 a.m. everyday of the week and instead of closing at 2 p.m., it now closes at 5 p.m. on Monday, Tuesday and Wednesday.

The cafe will also stay open until 6 p.m. on Thursday through Saturday and 7 p.m. on Sunday. James said the restaurant’s new hours give people a chance to come in after they get off from work and after they leave church on Sundays.

“I made the decision to try and catch people who are getting off work,” James said. “Also we’re open on Sunday for people getting out of church that don’t want to have to go all the way to Montgomery to get some food.”

“Our dinner plate ranges anywhere from $7.68 to $8.18 and that’s about the highest it goes,” James said. “For that, they get three vegetables, a meat and something to drink.”

Alabama State Rep. Darrio Melton discusses the importance of leadership in Selma and Dallas County. Melton, who was a member... read more