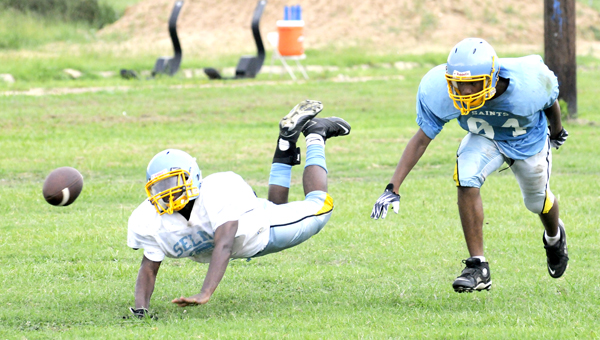 The three-day acclimation period is over and Alabama High School Athletic Association teams can now practice in full equipment.

“I thought the practice went great,” Miles said. “The kids were excited about it. They’ve been working all summer, so they couldn’t wait to get after each other. Usually the first day is real tough, but I think the cool weather helped us out a whole lot.”

The Saints used the first day of practice to go over blocking and tackling drills as well as goal line situations.

“We also went over full-line drills with linemen and linebackers,” Miles said. “It kind of gave us more of a look as a team.”

While Miles believes the first day went well, he and his staff will still look for areas where the team can improve.

Alabama Independent School Association teams continued practices in full pads, and the Ellwood Christian Eagles used the opportunity to go back to the basics.

The Eagles went over tackling and blocking drills to kick off the afternoon.

“We installed a little of our offense and some of our defense,” Stokes said. “We did a little special teams work.”

Stokes said practice went well and knowledge of the playbook wasn’t the only thing the players gained.

“It went very well. It was probably the best practice we had so far,” Stokes said. “We had a lot of enthusiasm and we gained a lot of confidence today.”

Stokes said he’d continue to drill his players on the basics and install more of the playbook.

“We’re just going to keep going over tackling drills and offensive schemes and putting players where they’re supposed to be to make plays for us,” Stokes said. “We’ll also work on more conditioning.”