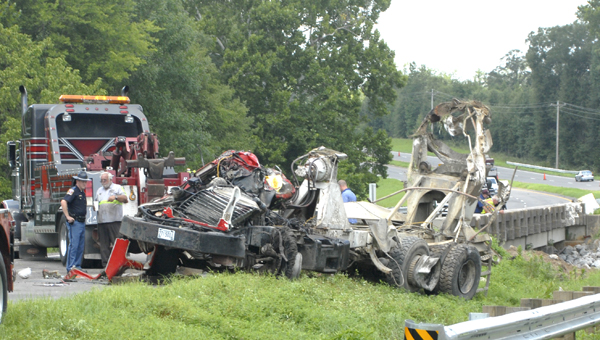 Alabama State Troopers are continuing to investigate the events surrounding an accident that resulted in the death of a local man Saturday near Southside High School.

According to a Troopers, which released the information shortly before midnight Saturday, the crash occurred at 9 a.m. on U.S. 80 at the 94 mile marker, eight miles east of Selma. Holboork was killed when the 1999 Mack truck he was driving struck a bridge and overturned.

The eastbound lanes of U.S. Highway 80 were blocked off for about half a mile Saturday midday as emergency officials worked to secure the scene and load what was left of the truck to be towed.

The eastbound lanes were still strewn with wreckage and diesel fuel, which caused a HAZMAT unit to respond as well.

Investigating officers said the accident, which took place near County Road 43, was still under investigation.

Editor’s note: Although many knew Mr. Holbrook was the victim in Saturday’s accident, the Times-Journal withheld that information until it was confirmed by State Troopers and all family members had been notified.

According to a post on the Times-Journal’s Facebook page, Holbrook’s family has arranged a viewing from 6-8 p.m. Sunday at Lawrence Funeral Home. The funeral is scheduled as 11 a.m. Monday at Meadowview Christian Church and burial to follow at New Live Oak Cemetery. In lieu of flowers the family has requested donations be made to the American Cancer Society.

Jasmine Clare and Tichina Sims work on their craft stick bridges. The activity was part of a lesson on civil... read more