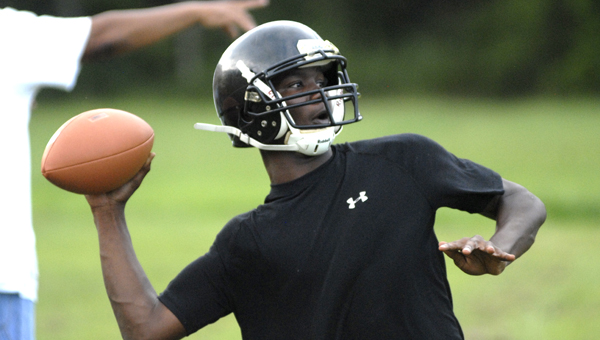 Alabama Independent Schools in Dallas County hit the field Thursday afternoon to get a first look at their 2011 squads. Morgan Academy, Ellwood Christian Academy and Meadowview Christian School all worked out in helmets and shorts to begin learning their offensive and defensive playbooks. -- Robert Hudson

The Morgan Academy Senators, Ellwood Christian Eagles and Meadowview Christian Trojans took to the gridiron for the first practice of the season.

In accordance with AISA rules, players practiced in helmets and shorts instead of full equipment.

The teams ran through various drills and formations with varying degrees of success.

“It went great,” said Brian King, head coach of Morgan Academy. “Today we just put everything together and it clicked really well. The guys are in good shape and it was just fun having everyone there and being able to go over everything we wanted to.”

King had his team go over offensive sets and said they benefitted from the 7-on-7 drills they practiced over the summer.

While King was thrilled with his team’s first-day showing, Meadowview head coach John Glasscock said his team has room for improvement.

“We’ve got some people who’s minds aren’t in it quite yet, but it’ll get there,” Glasscock said. “I wouldn’t consider it a good practice, but it’s going to get there.”

Glasscock said today was more of an organizational day for the Trojans as they went over the future practice schedule, handed out equipment and went over plays on a chalkboard.

Glasscock also ran his team through agility drills, showed them how to line up and how to form a correct huddle.

Ellwood head coach Mike Stokes used the first practice day as an opportunity to go over offensive and defensive plays, but said he did not have his full team.

“It was pretty good,” Stokes said of the Eagles opening practice. “I just didn’t have as many out as I expected. I think they’ll get out here before the season starts.”

Stokes said he’d be looking to instill discipline and searching for players who can do the little things to help the team find big success.