Ellison puts pests in their place 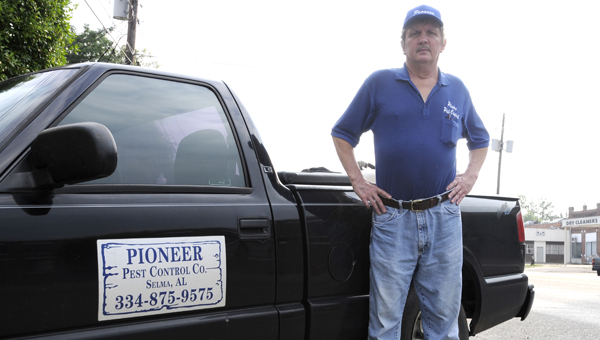 David Ellison has been in pest control for 28 years. The people, he said, make it all worthwhile. -- Rick Couch

“I accidentally more or less backed into this business,” said Ellison, who owns Pioneer Pest Control.

He was trying to get a full-time job with the National Guard and began working part time at a pest control company in Montgomery in 1983. His brother was already working there, and he began the job after watching his brother and the boss exterminate a rest home.

“I got back to his house, and he gave me a spray can and half a gallon of malathion, a chemical, and some dust and a duster and said ‘good luck,’” Ellison said. “And I didn’t know what I was doing.”

It’s a profession Ellison now loves, but said he was ready to give up on the third day of work — until he sold two accounts.

“I was a pretty good salesman, but I just wasn’t that good of a bug-man at first,” Ellison said with a laugh.

Ellison has come a long way since then. He has been running Pioneer Pest Control in Selma — ‘a one-man show’ — full time since 1988.

“I’ve always wanted to have my own business, since I was a kid,” Ellison said. “I wasn’t really planning on being full-time pest control.”

Ellison said for him, safety and customer satisfaction come before making a profit.

“You won’t make a lot of money in pest control,” Ellison said. “It’s not the money I keep doing it (for) … it’s because I like doing what I do.”

It’s the people he meets who keep Ellison going — and being in the business for 28 years means he’s met a lot of people.

“You don’t realize how many good people are out there until you’re in a business that you meet and greet people,” Ellison said. “I like doing a service for people and making them happy, because they need to get this done.”

Of course, the exterminator business isn’t always rosy. There’s a dangerous aspect to it as well.

“You get bit by dogs, you fall off of ladders and stuff like that,” said Ellison, adding exposure to chemicals can also be a concern.

One of Ellison’s mishaps involved falling out of a church bell tower.

“I broke my shoulder and separated a disk in my back,” Ellison said. Not realizing how badly he was hurt, Ellison finished the job, and the rest of the day.

“It took me about a year to heal … because I kept re-injuring my shoulder with working,” Ellison said.

“I go out of my way to be safe for the people I spray for and for myself and for the environment,” Ellison said. “I don’t try to do anything that’s dangerous for other people.”

The chemicals Ellison uses have very low toxicity levels, he said. That’s a common misconception, he added — it doesn’t necessarily require the strongest of chemicals to do the job right.

“You don’t need an atomic bomb to kill a rat,” Ellison said.

Ellison demonstrated this principle when dealing with a Norway rat in one customer’s home.

“(The customer) was getting ready to move, he was so upset,” Ellison said. “I mixed up some chemical, mixed up some peanut butter and put it out there for him … The next day (the rat) was dead in the yard.”

Rats are just one type of animal Ellison combats. As a pest control operator, he battles everything from mites and fleas to German roaches, yellow jackets and carpenter bees.

Of course, sometimes the bugs fight back — like the hitchhiking wasp from Marion.

“When I was taking my shoes off, when I got home, that’s when he stung me,” Ellison said. “He was wounded, and I guess he crawled into my shoe, and I didn’t even know it until I got back to Selma.”

But in the end, it’s all worth it to provide a service to others.

“If I’m killing something that’s bothering somebody else, then I enjoy doing that.”