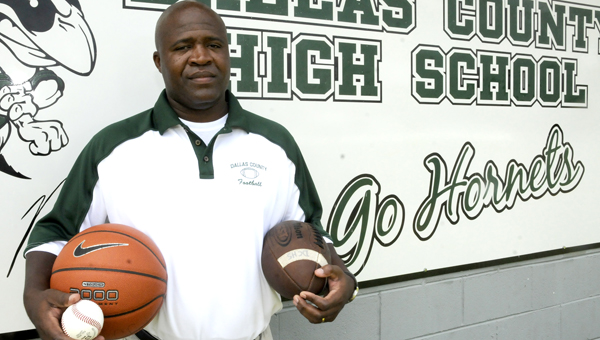 Along with his duties as Dallas County High School athletics director, Willie Moore will now pull triple duty as head coach of the men’s basketball, baseball and football. Moore said he believes coaching three sports could prove to be an advantage and bring more players to the football fiend. -- Robert Hudson

When Willie Moore was named the new football coach of Dallas County High School yesterday, he already knew what is expected of him.

Moore knows a little bit about responsibility and leading a program as he also serves as the athletic director and the head coach of boy’s basketball and baseball at Dallas County High School.

Moore said he’s not worried about having to juggle multiple positions, because it’s been done before.

“It’s going to be different being head football, basketball and baseball coach,” Moore said. “It’s a chore, but it’s something that’s been done successfully before at smaller schools.”

Another reason Moore is not worried about having multiple coaching jobs is because of a rule he put in place as athletic director.

Moore said basketball would start after the last football game is played, and scheduling will not be a problem because the basketball team will play multiple games during the week.

Moore also said he will not have trouble transitioning from the gridiron to the hardwood once football season ends, nor will the basketball team be unprepared.

“It’s not going to be a tough transition,” Moore said. “I’ve got a great assistant coach who only coaches basketball, and he’ll have the players doing preseason weight training and conditioning while football season is going on. The kids are not going to lose out.”

Moore is also looking to use his multiple coaching positions to potentially add some new athletes to the football team.

“Hopefully by me being the football coach, we can get some of the basketball players to come play football,” Moore said.

After guiding the boy’s basketball team to the playoffs last season, Moore is, ultimately, looking to carry over that success to football.

“Our goal is to put discipline in place and let them know they’re going to have to work hard,” Moore said. “We’ve had some division I players and success in the past. There’s no reason we can’t return to that.”

AISA schools go back to the basics

By Robert Hudson The Selma Times-Journal While some may think the first practice of football season is spent perfecting offensive... read more