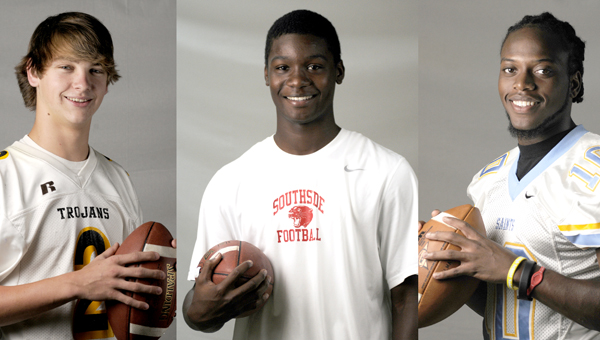 From left, Meadowview's Dylan Lawrence, Southside's Rajadavia Phillips and Selma's Darion Alexander all said they try to be leaders on and off the field. -- Tim Reeves

The quarterback position is the most important in football and one of the toughest, most complex positions in all of sports.

Quarterbacks are responsible for knowing the assignments of every player on the offensive side of the ball.

Responsibility is a common theme associated with the position.

With the 2011 high school football season on the horizon, local quarterbacks know the importance of responsibility and what’s expected of them.

“You’ve got to be a leader,” said Darion Alexander, senior quarterback for Selma High School. “One of the main things I’ve been doing is working hard on my leadership skills. I feel like my team looks up to me.”

Quarterbacks are expected to lead and direct the action on the gridiron. It’s the reason they’re often called “Field Generals.”

“You’re responsible for just about everything,” said Rajadavia Phillips, senior quarterback for Southside High School. “You have to make sure everything is right and on point. You’re the captain of the team.”

There’s a saying that football is just as much, if not more, a mental game as it is a physical game.

Phillips said his mental toughness is one of the reasons he can handle the responsibilities of being a starting quarterback.

“I’ve got a strong mind,” Phillips said. “You have to be mentally tough to play this position. You can’t be a weak-minded person.”

Naturally, pressure comes with the territory of being a quarterback.

“Yeah, I feel a little pressure,” Alexander said. “I feel like I have to perform.”

But Alexander added that, as a quarterback, you can’t let the pressure get to you and adversely affect your play, because your teammates are counting on you and looking to you for leadership.

“The team looks up to me,” said junior Dylan Lawrence, quarterback for Meadowview Christian. “So, I go out there and do my best and do whatever I can to succeed.”

All three quarterbacks know one thing for certain. You have to embrace the responsibility, because regardless of if you fail or succeed, all eyes will be on you.