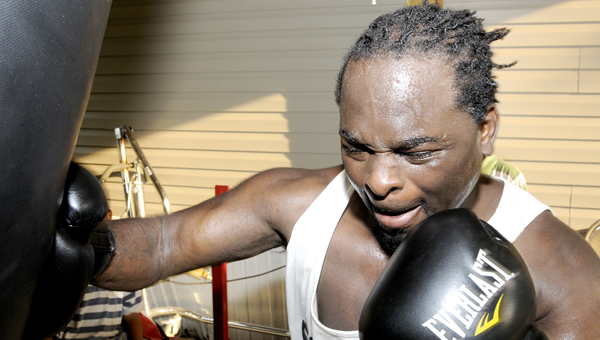 Robert Dower works out on a bag to demonstrate the proper way to throw a punch. -- Robert Hudson

A local resident is aiming to get people to put down the guns and pick up some gloves.

Robert Dower is giving boxing training out of a friend’s garage on Hall Avenue to local children and teenagers in order to help keep them out of trouble.

“The main reason I’m doing this is because there’s so much violence in the city and the reason I know is because I came up here,” said Dower. “When I was a kid and I trained with the boxing club it kept me out of trouble and kept me out of the streets. I think this can help kids and it builds character in them.”

Dower used to train fighters at the boxing center in the Selma Youth Development Center before the program was shut down.

Dower is still a registered trainer, referee and judge with USA Boxing and is a former fighter himself, having boxed in the Olympic trials in 1996.

Dower is a no-nonsense trainer who requires hard work and dedication from those who participate.

Dower has no tolerance for anyone using their training to hurt others outside of the ring and anyone who does so will not be allowed to train with him anymore.
Dower said he’s talked to Selma Police Department Chief William Riley and Selma City Council Ward 8 representative Corey Bowie in hopes of finding a better place to train and starting a boxing program.

“I went to the chief of police and I’ve talked to him. I’ve talked to the city council representative of Ward 8 and I’ve been trying to talk to the judges around here,” said Dower. “I’m trying to get everyone involved. My way of saving the youth is getting them to put the guns down and pick up these gloves because the energy they take to pick up guns, they can take the same energy to pick up the gloves, go compete in a positive way and stay out of trouble.”

Bowie said he fully supports Dower and is working toward getting some facilities for Dower to train the youths.

“This gives another outlet for the youths in Ward 8,” said Bowie. “It teaches discipline, attitude and teamwork. I thank Robert for having deep care for the kids and the ward.”

Dower said he gets about eight children a day to train and he trains those who are looking to become fighters or just want to get in shape.

Two of his fighters, Pierre Webster and Rashad Jones, have prior boxing experience coming with Webster having experience on the national level.

Dower hopes to get any potential fighters registered to compete in an upcoming boxing event in Tallahassee, Fla. next weekend.