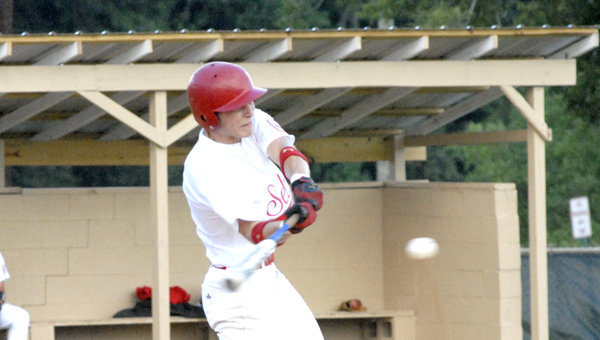 Selma’s Daniel Blackman takes a swing at an Auburn pitch in the team’s 11-1 loss. Selma will have to win a 9 a.m. game against Sheffield to stay alive in the tournament. Auburn will meet the winner of Opp and Guntersville. -- Robert Hudson

The rain started pouring down in the third inning, but it soon started raining home runs as the Auburn All-Stars cruised to an 11-1 win over Selma at Bloch Park.

The loss sends Selma to the loser’s bracket where they’ll face Sheffield at 9 a.m. today in an elimination game. Auburn will meet the winner of today’s game between Opp and Guntersville and will play later tonight at 8:30.

“We just weren’t ready to play today and I guess that’s my fault because the coach has to have the team ready,” said Robert Massey, head coach of Selma. “We just didn’t hit the ball well.”

Auburn took an early 2-0 lead, but Selma would get on the board after loading the bases and getting a run walked in by Auburn.

After a scoreless second inning, Auburn started to heat up in the third as Dalton Pritchett hit a three-run home run.Auburn would add two more runs in the inning including one on a wild pitch by Selma. Auburn wasn’t done as Pritchett and Chase Edwards hit back-to-back solo home runs in the fourth.

“We went into the game trying to win every inning and we pretty much succeeded,” said Kennon Whaley, head coach of Auburn.

Massey said Selma has to put the loss behind them and get ready for the next game if they want to stay in this tournament.

“The better team today won. I mean, we weren’t in their class today,” said Massey. “We’ve got to battle up and come and get ready to play in the morning.”

Selma player Daniel Blackman was ejected in the fifth inning for rough play and will not be eligible to play in today’s game.

It was a tough day for Thomasville pitchers as the Oxford bats caught fire early and often. Oxford will face... read more