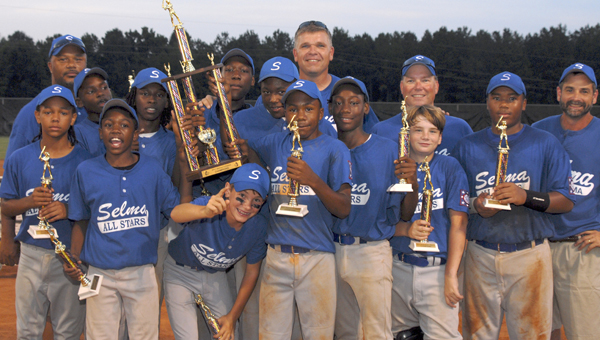 Above, the Selma 11 and 12-year-old Dixie Youth O-Zone All-Stars celebrate after their 17-0 win over Marbury. -- Chris Wasson

With history on the line Thursday night, the Selma 11-12 Dixie Youth O-Zone All-Stars left no doubt in their win over Marbury.

The Selma side belted out 17 runs on 17 hits in the championship game win to become the first ever team from Selma to represent the city in any state tournament game.

“I’m proud of you guys,” Selma assistant Mike Stokes said to his players after the game. “You’ve now done something no one else has done before. I want you to enjoy this moment, because you’ll remember it for the rest of your lives.”

The win was the most complete game the Selma team played in the tournament that saw them sweep the competition.

“We did it in all the phases of the game today,” Selma manager C. Dwight Woods said. “Damian Murry did a great job on the mound for us today. Kenyon Smith and Keshawn Arrington made some great plays in the field. (LaDarius) Woods hit two home runs. The whole team just raised their level of play to a state level tonight. We needed this kind of game.”

The All-Stars scored one run each of the first three innings and two runs in the top of the fourth to take a 5-0 lead going into the fifth inning, but then the team really did it’s damage.

Lead by LaDarius Woods’ two home runs in the inning, the O-Zone All-Stars put up 12 runs total to break the game wide.

Following the win, the team will take some time away from the diamond to enjoy their win and rest a little bit according to Stokes.

“We want them to enjoy it,” Stokes said. “They deserve to enjoy this and have some time away. It will be good for them to have time off and they earned it tonight.”

The win advances the squad to the Dixie Youth O-Zone state championships in Center.