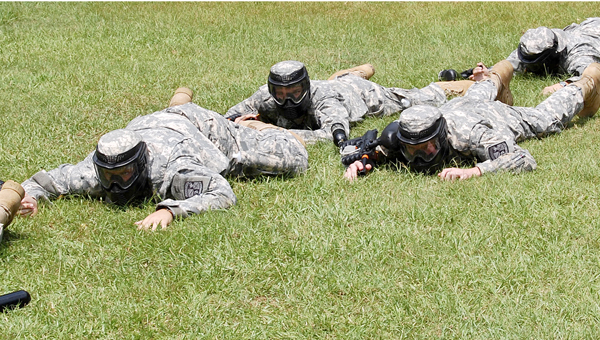 Cadets at Marion Military Institute have been busy this summer by participating in Tiger Camp. Two groups went through the camps before heading to leadership training at Fort Knox. -- Special photo

While most graduating high school students are spending their time relaxing by a pool, recruits to Marion Military Institute are putting in work.

Wednesday the last of recruits from MMI left for Fort Knox, Ky., after spending a week at the school’s Tiger Camp for prospective ROTC students.

Two groups went through the Tiger Camp, the first June 18-24 and the second June 23-29, before going to the Leadership Training Conference in Fort Knox.

“These are students we are recruiting,” Lt. Col. James Lake, executive officer of the ROTC program and assistant professor of military science at MMI, said. “The Tiger Camp gives us a chance to continue to recruit while we give them basic military training so they have an understanding of what is expected of students in the accelerated ROTC program.”

During the Tiger Camp, recruits were able to get firsthand experience at what life at MMI would be like should they choose to attend in the fall. An average day consisted of waking up about 5:30 a.m. and going to physical training before coming back to breakfast.

Cadets would then spend the morning learning the military training in a classroom before putting that newfound knowledge to use in activities in the afternoon.

“We want them to have fun with what they learned,” Lake said. “It’s a good, fun adventure training that really boosts moral and helps learn team building.”

Some of the many things learned during the initial training were map reading skills, swimming for those unable to do so and advanced swim techniques for those who were already skilled swimmers, as well as a physical test of push-ups, sit-ups and a one-mile run.

“We wanted to make sure the students were proficient in the basic military skills before they went to the LTC in Fort Knox,” Lake said.

The event rounded off with an exciting game of paintball, which enabled the recruits to use all they had learned throughout the week.

“It’s the last event we do,” Lake said. “They learn all week about these Army Operations Orders and this is a fun capstone to the entire event.”

A quiet afternoon in downtown Selma changed quickly when a Chevrelet Silverado crashed into the Karate World around 3:18 pm.... read more