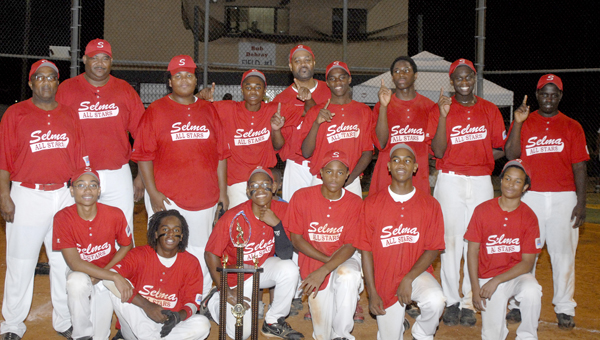 The Selma 13 and 14-year-old all star team stands in front of their Dixie Youth District 4 championship trophy. The team is one of at least four different teams that will represent Selma in the state tournament of their respective age groups over the next few weeks. -- Chris Wasson

With an unprecedented four all-star teams already qualified to play in the state tournaments, the city of Selma still has four more teams in the hunt to qualify.

“Very seldom do you have more than two teams qualify for the state tournament,” said Elton Reece, director of Selma Parks and Recreation. “It’s been a weird year, but it’s been a great year.”

Reece said this is the most teams Selma has ever had qualify for the state tournament.

He said last year the city had $11,000 budgeted for tournament expenses, meals, uniforms, transportation and hotels, for the all-star teams.

“I dare to say there’s probably not another city in Alabama that does this, but the mayor and city council have money budgeted for this,” Reece said. “The responsibility would usually fall to the parents to provide the funds.”

With an increase in teams qualifying for state comes a need for more money to fund said teams.

Reece said, starting Monday, he’ll have to look in the budget to find more money for the teams.