Windham a pioneer on many levels 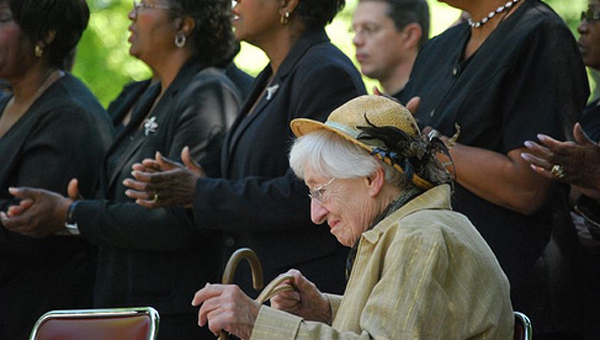 Beloved storyteller Kathryn Tucker Windham was known for her books, her play, her photography, her journalistic career and her radio broadcasts. Windham died Sunday at her home in Selma.

Windham is best known for her series of ghost stories with her friend Jeffrey, but she was writing long before she penned those tales.

Windham was born on June 2, 1918 to James Wilson Tucker and Helen Gaines Tabb Tucker in Selma. She spent her childhood in Thomasville, which is where she got her first taste of writing; in 1930 she began writing movie reviews for the Thomasville Times, which was owned by her cousin, Earl Lee Tucker.

Windham is well known, however, for more than her writing. She got her start in photography in 1930 as well, with a Brownie Kodak she received in a giveaway from Peoples Drug Company in Thomasville. Decades later, Windham maintained that she took some of her best pictures with that camera.

Windham graduated from Thomasville High School as the valedictorian in 1935 and continued her education at Huntingdon College in Montgomery, graduating in 1939 with her B.A.

J. Cameron West, president of Huntingdon College, said Windham has left a lasting impact on him as well as the college.

“Kathryn was always generous to Huntingdon, never failing to accept my frequent invitations to return to campus,” West said. “She was as popular with her youngest fans as she was with those who had listened to her stories for decades.”

West also has many personal memories from time spent with Windham.

“Perhaps my fondest memories of Kathryn will be our visits at her home in Selma, where she served me her homemade ambrosia and gave me permission to pick up the bowl and drink the juice,” West said. “She taught me to love Alabama barbecue with our lunches at Hancock’s.  She always sent me back to Montgomery with some kind of Huntingdon memorabilia, all of which now sit either in the President’s Home or the President’s Office for Huntingdon alumni and friends to see.

“I will miss her terribly and remember her gladly. The Huntingdon family is blessed that she is one of ours.”

Windham started working at The Alabama Journal in 1940. She is purported to be the first woman journalist to cover the police beat at a major daily newspaper in the South, which she did for two years.

“She was a pioneer in journalism for women, being the first woman reporter to cover a police beat,” Alabama Press Association’s Executive Director Felicia Mason said. “Her contributions and influences to journalism set the bar so high, not just for women journalists, but all journalists.”

Working for the Alabama War Bond Committee was Windham’s next stage in life. She served there as the publicity director in 1942.

Windham met her husband, Amassa Benjamin Windham, in 1945 while working for The Birmingham News, where she edited articles on state news and aviation, as well as serving as the courthouse reporter, beginning in 1943.

They were married in 1946 and had three children: Kathryn (Kitti) Tabb Windham, Amasa Benjamin Windham Jr. and Helen Ann (Dilcy) Windham Hilley. They moved back to Selma to raise their family.

From 1950 to 1966, Windham wrote a column called “Around Our House” for a local newspaper, but it was in 1956 when her husband died of a heart attack that she went back to working for a newspaper full time at The Selma Times-Journal.

“She served admirably in a number of roles there as a reporter, as a city editor and in other capacities,” former Times-Journal editor Jamie Wallace said. “She did a great job on a paper that won me accolades during those days.”

Wallace, who also served as the Selma-Dallas County Chamber of Commerce director for 17 years, said Windham was a national treasure.

“She was a woman of remarkable talents, a front-runner who paved the way for others in pursuit of journalistic excellence,” Wallace said. “She was also a leader in the community in the school board and other boards as well.”

Windham published her first book, Treasured Alabama Recipes, in 1964. This was just the beginning of her literary career. Windham went on to publish three more cookbooks, as well as autobiographical memories and her famous ghost stories, beginning with Thirteen Alabama Ghosts and Jeffrey, which she co-wrote with Margaret Gillis Figh in 1969.

Windham ended her career at the Times-Journal in 1973 and became the Community Relations Coordinator for the Area Agency on Aging.

Her break into storytelling came with the invitation to speak at the second annual National Storytelling Festival in Jonesboro, Tenn., in 1974. In the late 1970s, she founded the Alabama Tale-Tellin’ Festival, which takes place every year in Selma.

In 1981 Windham performed in her one-woman play, My Name Is Julia, based on a book that quickly turned into a script. Windham continued writing — Spit, Scarey Ann, & Sweat Bees: One Thing Leads to Another, memories of Windham’s childhood, was published in 2009.

Radio commentaries were part of Windham’s life beginning in 1984. They were broadcast on WUAL, the public radio station in Tuscaloosa, but some segments were also broadcast by National Public Radio.

Odd Egg Editor was published in 1990, and Ed Williams, professor of journalism at Auburn University, said this is one way Windham will continue to impact journalists — he uses the book in his classes.

“I think it was an inspiration to a lot of women, that women could be every bit as successful in journalism as a man could be,” Williams said. “She’s really had three careers in one — as a journalist, as a writer, as a storyteller.”

Williams said he regularly his news writing classes on field trips to meet Windham, and since her death he has had students thanking him for that opportunity.

“She always talked about the L’s in life — the importance of love and laughter,” Williams said. He said he thinks that’s how people will remember her. “That’s what her life was all about.

“Any time we talked on the telephone, she always ended the call with, “Ed Williams, thank you for being my friend, and I love you.”

Williams is not the only one who has recognized Windham’s contribution to the world.

On June 1, 2003, the Alabama Southern Community College in Thomasville opened the Kathryn Tucker Windham Museum with a celebration of her 85th birthday.

Other honors include the University of Alabama’s Society of Fine Arts’ Alabama Arts Award in 1990, Selma Rotary Club’s Citizen of the Year in 1995, National Storytelling Association’s Circle of Excellence Award and Lifetime Achievement Award in 1995, Governor’s Award for the Arts in 1995, induction into the University of Alabama College of Communications Hall of Fame in 2001. She was also of the Alabama artists selected by the Alabama State Council for the Arts to represent Alabama in France and Monaco in 2000.

Jennifer Greer, journalism chair at the University of Alabama, said Windham was chosen for induction into the hall of fame because of her many contributions to communication.

“One of the things she is noted for was for making inroads as a female reporter,” Greer said. Greer emphasized her impact for women today trying to break into journalism. “There are jobs for them because the barriers have been broken by people like Kathryn Tucker Windham.”

Ed Mullins, former dean of the College of Communication and Information Science at University of Alabama, and former chair of the journalism department, elaborated on Windham’s contribution to the University.

“Any time we called on her to make a talk to a class, to be the keynote speaker for some special event, she was always willing to come — even though she was not a graduate,” Mullins said. “She was, in what she did, a genius. Nobody matched her. Nobody ever will match her.”

Mullins said he remembers observing Windham as she would do her radio program.

“She was really one of the early superstars of pubic radio in Alabama,” Mullins said. “I watched her a couple of times as she did these. No notes, she’d just close her eyes and start talking.

“She represented the greatest example of authentic southern dialect … She was just marvelous to listen to.”

Windham celebrated her 90th birthday at the Selma-Dallas County Public Library and Church Street United Methodist Church, where dozens of friends and family members enjoyed cake and Moon Pies, and Windham led the masses in a concert on combs with wax paper, one of her favorite hobbies to share.

In her book Twice Blessed, Windham said, “My grave marker won’t be one of those fancy examples of the stonemason’s art, nor will it have a flowery epitaph. I’d like to have some words from one of Jan Struther’s poems: ‘She was twice blessed: She was happy; She knew it.’”

Kathryn Tucker Windham died June 12th at her home in Selma.  She was predeceased by her parents, James Wilson Tucker... read more