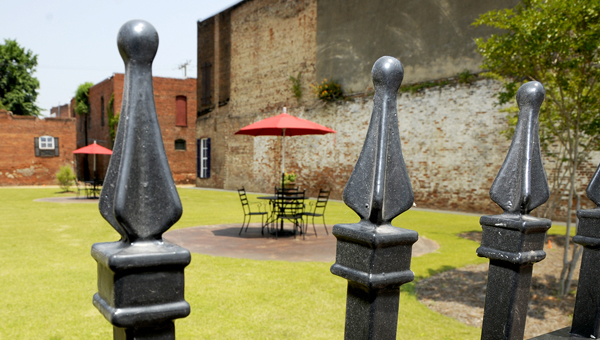 Colorful flowers adorn a pot at the edge of Phoenix Park as ceremonies marking the park’s opening go on in the background. The park, which is located at the site of the old Phoenix Building, is located on Water Avenue, directly across the street from the St. James Hotel. -- Tim Reeves

Selma now has more green space with the opening of a new downtown park.

The new park has been christened Phoenix Park after the building that once stood at the same location.

“The phoenix stands for rising from the ashes,” Dallas County Probate Judge Kim Ballard said at the Friday ribbon cutting. “This was the ashes. It’s not the ashes anymore.”

The park was a joint effort between many people, one of whom was Nancy Smith, who first had the idea to do something with the empty lot.

“I used to sit in the St. James over there, having dinner, and look over here at what was just an awful mess of weeds and garbage and litter,” Smith said.

Smith said George Needham, member of the Historic Preservation Society, originally had the idea for the park, and Smith found inspiration for Phoenix Park from a park in Prattville.

“We’ve got a lot still to do, but this is the giant leap,” Smith said.

The park features trees and plants, donated by Smith’s family and friends, as well as tables, chairs and colorful umbrellas, which were donated by Plantation  Patterns.

“Everybody cooperated,” Smith said. “The weather sometimes didn’t. Other than that, it’s absolutely wonderful.”

Don Johnson, project manager at Plantation Patterns, said they decided to donate the park furniture after reading about it in the newspaper.

“From what this was when I moved here — the building collapsed — and now to see it turn into this is wonderful,” Johnson said.

Charlotte Griffeth, who also worked on plans and implementation of the park, said Public Works Beautification Division will manage upkeep.

The grass should stay nice and green due to an underground irrigation system.

“The system comes on at night,” Griffeth said.

The sprinklers are also equipped with sensors that disable them if there has been plenty of rainfall, Griffeth said.

Smith said some of the things still left to do include adding park benches and painting a mural on the wall of an adjacent building.

Karen Weir, another of the park’s designers, worked to clean up and repair damaged windows, and then painted on fake windows and added fake accessories to camouflage what used to be.

“The brick work was already existent, and then what you had was junky metal that was falling out, and that had all broken panes and window frames that were awful,” Weir said, pointing out the improvements.

Weir said in the time until the mural, which may depict a streetscape of old-time Water Avenue,  is completed, she would like to have outdoor movies.

“Wouldn’t that be fun? Just bring your blanket and popcorn,” Weir said.

Weir isn’t the only one who already has plans for the park. Councilman Corey Bowie, whose ward the park is in, said he wants to get out there to go running. Mayor George Evans also had his own idea.

“I can’t wait to get down here and lay in the grass and read a book,” Evans said in his speech before the ribbon cutting.

Evans, who called the park “truly beautiful,” said he is excited about this new addition to Selma.

“I’m just excited that every time I look around, something new, something different, something good is happening in our city,” Evans said.

But perhaps Bowie said it best and simplest.

“This is a great day in Selma.”