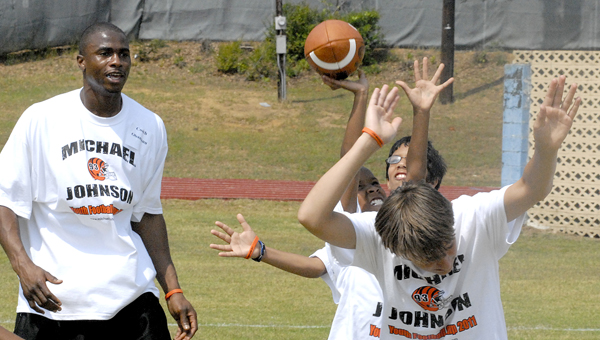 Former Selma High School and current Seattle Seahawk standout Ben Obomanu conducts drills during the MJ93 camp Saturday. Obomanu has been using his down time during the lockout to recover from shoulder surgery. -- Chris Wasson

While the NFL lockout has left fans wondering when they can begin to feed their obsession, players have taken to working out on their own.

Selma natives Ben Obomanu and Michael Johnson were both in town for Johnson’s football camp and talked about how they are working through the lockout.

“You have to pretend like it’s going to end tomorrow,” Johnson said. “Going through the drill is different without the coaches and like anyone, we get rusty when we aren’t working through them.”

Johnson said he has spent time working out at his alma matter Georgia Tech to stay in shape before heading back to Cincinnati later in the month.

During his camp, Johnson said he was still shaking off the cobwebs on his own while trying to run through the drills.
“I’m even rusty from drills, so I’m out there getting better with (campers)” Johnson said. “You just have to do what you need to do to stay sharp.”

Obomanu has been recovering this offseason from shoulder surgery.

The Seattle Seahawks wide out had his surgery done in Birmingham and due to the lockout, is doing his rehab there as well.

“The rehab is going pretty well, but it’s tough without being able to talk to anyone from Seattle. They (workers in Birmingham) have probably treated me more as a person, but the team could certainly do it as a player to get me football ready.”

With such progress in the rehab, Obomanu said he was hopeful to be healthy by the time the lockout ends.

“Again, though, the problem is not knowing exactly what schedule they want me on,” Obomanu said.

“When I finally get a chance to talk to them, they may think we have been rehabbing too hard, or not hard enough. You never know.”

So while the two continue to work hard they, as much as the regular fan, hope the lockout ends soon and work can begin again.

Selma defenders swarm a Jeff Davis runner. The Saints defense kept the Jeff Davis offense contained for most of the... read more