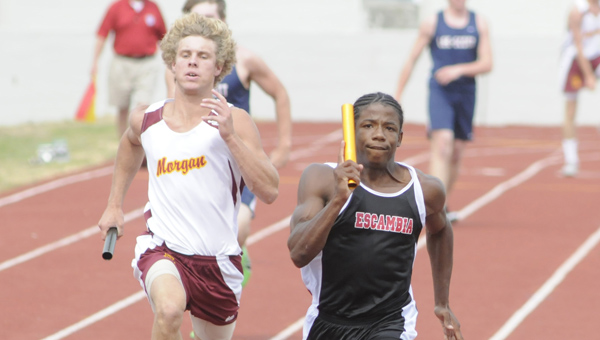 Coaches from both schools said they were pleased with the way their athletes had qualified and were hoping for more.

“Right now we have about 17 boys that are qualified for tomorrow,” Meadowview coach John Glasscock said. “That is big for our track program. We weren’t very good for a while and are trying to build it up. This is a good start.”

Morgan coach Rob Robinson said he though his team was on a good pace for tomorrow.

“We’ve have got the athletes qualified, who should be and a few others,” Robinson said. “Today is all about just making it to the next day except for a couple of events. We have done a pretty good job with that.”

The meet has not gone on without a little bit of controversy according to Robinson, who is also serving as the race director.

The meet’s grievance committee was called into action multiple times, slowing down the races and pushing events further back off schedule.

“It’s been anything from not all the uniforms looking the same, to numbers falling off during the race,” Robinson said. “Some of that stuff should be dealt with the coaches before the meet even starts and we shouldn’t have to push the race back for them, but it is the rules.”

Only two finals were held Wednesday, the high jump and the 3200-meter relay.

The Dallas County Lady Hornets got back on the winning track Tuesday with a 9-0 win over Wetumpka High School.... read more