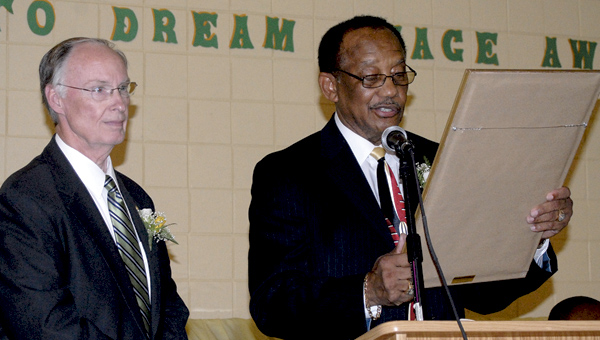 “It’s great that all of us can come together to celebrate success,” Ryan said.

After putting himself through medical school at the University of Alabama and then completing his residency at the University of Alabama-Birmingham’s dermatology school in the 1960s, Bentley enlisted in the U.S. Air Force as a hospital commander in 1969.  Bentley, who also served on the Board of Trustees for Judson College, said there’s something special about small Christian colleges.

“I really love small Christian colleges,” Bentley said. “I believe God controls our lives and that I am governor for such a time as this. It’s a pleasure to be back in Selma.”

Bentley, whose parents didn’t finish the seventh grade, stressed the importance of education.

“I stand here today because of my parents who’ve always encouraged me and told me I could be whatever I wanted to be,” Bentley said. “When no one in my high school class thought I’d be a doctor or much less a governor, my teachers encouraged me. Let’s continue to support and love each other.”

Since taking office, Bentley has created more than 3,000 jobs for cities like Thomasville, Mobile and Alabaster and he hopes to create 700 more in the next few years, which includes Selma.

“We will create jobs for the state of Alabama, especially in this area,” Bentley said. “We don’t want to hurt anyone but in order to balance our budget, teachers and state employees must sacrifice. We’re going to continue to make tough choices with sympathy and empathy. Selma is a beautiful place and I want to do everything I can to help it thrive.”

Selma Mayor George Evans declared Thursday as “Gov. Robert Bentley Day,” and presented Bentley with a plaque for his efforts to the area. Bentley, Evans and Crum were also inducted as official “Concordia Hornets” and presented with straw hats by director of alumni affairs, Minnie McMillan and alumni president, Gwendolyn Stewart.

Sanders, Sewell and Summerville could not attend due to prior engagements.

It’s official. We have a full ballot for the special election on May 24 to fill the open Ward 3... read more