Battle set to start with a bang 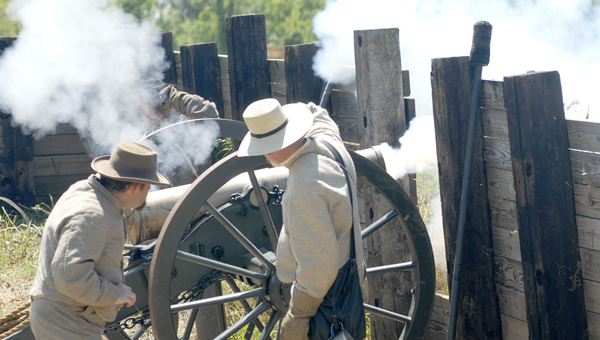 Artillery units fire their cannons during the 2009 Battle of Selma main Sunday battle. The 2011 Battle will kick off with consecutive school days on Thursday, April 28 and Friday, April 29 with a cannon firing demonstration behind held at twilight on Friday night. Organizers are expecting more than 400 re-enactors and more than 20 artillery pieces. -- File Photo

Although it won’t mark the beginning of the annual Battle of Selma events, the twilight hours of Friday, April 29 will be ripped wide open by a cannon fire demonstration sure to shake loose the historian in anyone.

With just five weeks remaining until the first scheduled Battle of Selma school day, officials with the April 1865 Society are rushing to put the finishing touches on the annual re-enactment.

“I was out at the battlefield all day today. Working on a pretty good tan,” James Harrison, president of the April 1865 Society, said. “I’ve got a checklist that I am working from and it is a pretty long checklist.”

The society is in its third year of organizing the re-enactment and Harrison said the group and the event are on much stronger financial footing than they were when they took over the event in 2009.

“The organization and the battle have a strong financial foundation,” Harrison said. “The membership effort has given us the financial strength to ensure we are in good shape if we have bad weather during the events that would hurt attendance.”

This year’s events will begin Thursday, April 28 with the first of two school days, where children from schools throughout the Black Belt can come in and observe period presentations, camp life, armament and even enjoy kettle corn and root beer.

The cannon fire demonstration is set for Friday evening at dusk, which Harrison said could be around 7:30 p.m. Both the demonstration and camp dance are free to the public and those attending are not required to be in period dress.

“We will even have some instructors on hand to help teach you some of the period dances if you wish,” Harrison said.

The first skirmish of the Battle of Selma will be held Saturday, April 30 at around 2 p.m. at the battlefield located near Bloch Park and Memorial Stadium. Gates will open at 10 a.m. and admission is $7 per person.

Sunday’s events will begin with a solemn memorial service at Old Live Oak Cemetery at 10:30 a.m. and then the large Battle of Selma re-enactment at the battlefield at 2 p.m.

Hammonds said he has received registration information from more than 300 re-enactors scheduled and 22 cannons scheduled to take part. He expects to have between 400 and 500 re-enactors signed up before the event arrives.

This year’s battle is taking place a week later than usual due to the fact organizers wanted to move it back due to the Easter weekend.

“Last year, we had a wash out on Saturday, but saw well over 1,000 spectators attend Sunday’s battle,” Hammonds said. “If we have nice weather, we should really see something special.”

For more information on the Battle of Selma visit the official website at www.battleofselma.com.

YMCA has time and equipment to get fit

James Towner Glover Jr. walks on a treadmill in the fitness room of the Selma-Dallas County YMCA. Glover said the... read more