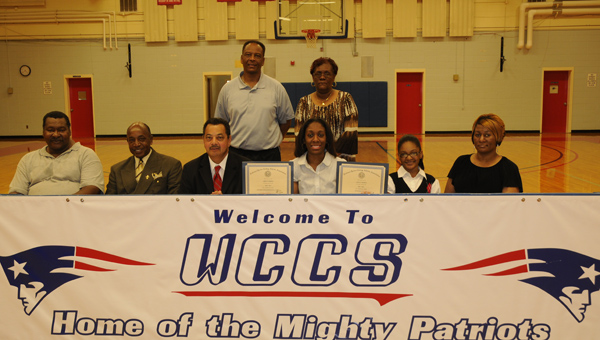 Wallace Community College point guard Ashley Grimes was recognized Tuesday for leading the Alabama Community College Conference in scoring this season. Grimes, who averaged 20.72 points per game, was honored with a special ceremony in the gym. -- Rick Couch

In only one year with the Wallace Community College Lady Patriots basketball team, Selma native Ashley grimes has made herself at home.

The former Selma High School star became an immediate leader and was honored by the school Tuesday for leading the Alabama Community College Conference in scoring.

Grimes, who averaged 20.72 points-per-game, said it is rewarding to know the long hours of practice had substance.

“It means a lot to know that all my hard work paid off and I know I couldn’t have done this without my teammates,” she said. “Now I want to put everything I can into next year and see where we can go from there.”

Now, Grimes said, the team is turning its attention to accolades the entire squad can share.

“We still haven’t achieved what we wanted to,” she said. “We want to win the conference championship next year.”

Grimes has been a model student on and off the court, Wallace Community College president James Mitchell said.

“We are very proud of Ashley,” he said.

“She is an outstanding student and a role model for the entire student body. She has a great attitude and epitomizes how a student athlete should approach academics.”

Despite her quiet demeanor and constant smile, Lady Patriots head coach April Harper said Grimes is all business on the court.

“She has been a powerhouse for us, she can do it all,” she said. “She’s a great rebounder and an excellent player. To have her come back for a second season is a pleasure.

“She loves the game.”

After a stint at Auburn University at Montgomery, Grimes said she was eager to return to the friendly confines of Dallas County. Her decision to come home made her a better student and a better basketball player.

“It makes it a lot easier to be close to home,” she said.

“It puts me in my comfort zone. I know that I have all the help and support I need right here. That puts me at peace.”