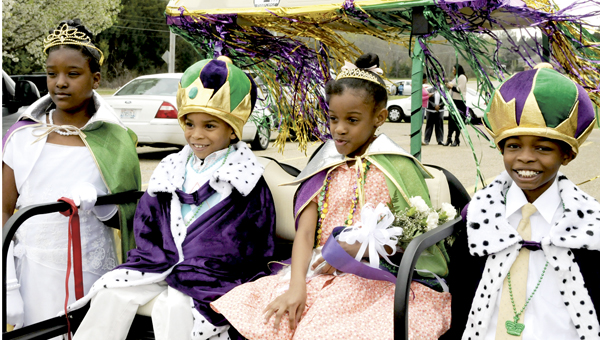 In the spirit of Mardi Gras, students from Cedar Park Elementary celebrated with their own festivities Tuesday.

Four students, who were crowned Mardi Gras king and queen and prince and princess during the school’s coronation ceremony Monday night, led the procession Tuesday.

In its second year, both events helped to raise money for classroom supplies and reading material, teacher resources and computer software.

Krystal Dozier, first grade teacher for Cedar Park Elementary, said the school began fundraisers in January. Due to the collaborative efforts of teachers and staff, she said, the Mardi Gras activities have been a great success.

“We’ve raised a lot of money this year and we worked really hard,” said Dozier, who also helped with the parade. “Parents, local businesses and churches have been very supportive with donations. I think it will continue to be successful.”

Bertram Pickney, principal for Cedar Park, said the event helps the school during a dismal time.

“Aside from financial woes of the school system throughout the country, with proration and budget cuts, it’s a good time for parent and teacher involvement,” Pickney said. “Teachers and parents are in this together.”

“My goal is exposure and I want to avail students academically and culturally as much as possible,” Pickney said. “Exposure is a major contributor to education.”

Dozier said the event would not have been possible without the following sponsors: First Cahawba Bank, Tabernacle Baptist Church, Fred’s Flower and Gift Shop, The Flower Basket, A&R Sales and George Tarver.

High-speed chase covers most of Selma