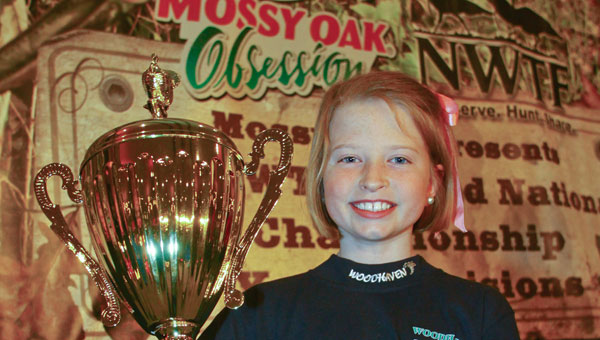 A hobby for Camden’s Anna Leigh McGraw turned into history recently when the 9-year-old became the first female to win at the Grand National Turkey Calling Championships since 1994.

McGraw, who won the Poults division for children 10 and under, said she was shocked when her name was called.

“It was amazing, I never expected to win,” McGraw told representatives of the NWTF. “Plain hen yelp is my favorite call, but I’m best at the fly down cackle.”

McGraw gets her calling skills from her father, who won the Grand National Friction division title in 2009.

Each year the NWTF hosts the Grand Naitonal Turkey Calling Championships at the National Convention and Sport Show. Dozens of the world’s best callers gather to test their skills in front of a panel of judges.

This year’s convention was titled “Our Youth, Our Legacy” and as the first female champion in the event in almost two decades, the NWTF said McGraw is “leaving quite a legacy.”

NWTF CEO George C. Thornton said he always enjoys the rush that comes when the winners are announced.

“When we call the name of the new grand champion, the atmosphere in the room is electric,” he said. “It takes a special talent and years of practice to master the sounds of a wild turkey. To become a champion on our stage is the most prestigious honor a turkey caller can achieve.”

This year, champions were crowned in 10 divisions at the Opryland Resort and Convention Center in Nashville.

In the Poults division, sponsored by Mossy Oak, callers imitate yelps, cackles and clucks of a wild turkey hen. Overall the winners from each division competed for their share of $25,000 in cash and prizes.

Signing is a dream come true for Mott