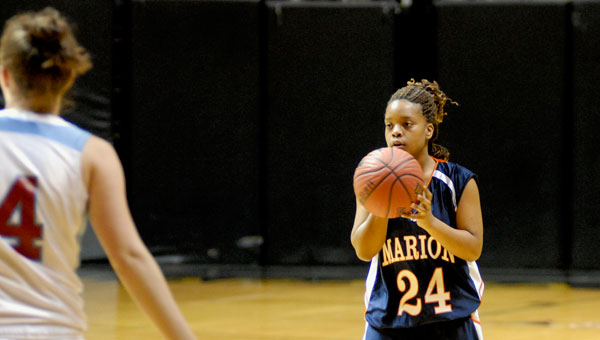 Keel finished with a game high 15 points as the Lady Generals came from behind to defeat Francis Marion 33-29 in the opening round of the Class 2A central regional tournament in Montgomery.

“We struggled in the third quarter,” Francis Marion head coach Michael Bedell said. “They were able to kind of take control of the game from there. They started doubling down in the paint and we started turning the ball over and making mistakes.”

Francis Marion opened the game setting the tempo, forcing turnovers and getting to the free throw line.

After the break, a more determined Horseshoe Bend squad came out.

Then after a rebound on the Lady Generals’ next possession, Keel ripped the ball from Khadijah Bates and drove for an easy layup to take a lead; a lead they would not relinquish.

“I knew that somebody had to step up,” Keel said. “I just tried to take charge there and tried to get the tempo up. I’m one of the team captains so that’s one of my jobs.”

Francis Marion was still never completely out of the game and even had a chance to tie the game at 31 with 22 seconds left to play, but it was not to be.

“We just missed our chances when they were there,” Bedell said. “You have to tip your hat to Horseshoe Bend. They did a great job out there on defense today.”

“I’m proud of these girls,” Bedell said. “People didn’t expect us to even get this far. We only lose two girls, so we are going to get back in there and work even harder.” He said.