From charity to profession 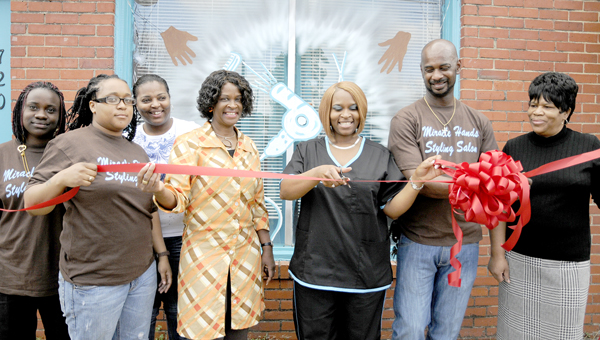 Tammy Suttles is living her dream.

It was always her vision to own her own hair styling business and when she cut the ribbon to Miracle Hands Hair Salon, she began living her dreams.

“I knew this was what I wanted to do,” Suttles said. “I graduated in 2004 twice within a week. On degree was from Selma High School and the other was from Wallace, where I had been going to cosmetology school.”

When her mother, Gloria, was diagnosed with breast cancer, Suttles began cutting hair every Monday and Tuesday as a fundraiser, with the proceeds going to the Carmichael Center in Montgomery where her mother went for treatments.

While it made money for her mother to recover, the fundraisers also gave Suttles the valuable experience needed cutting hair and working with customers.

That experience only helped to further her dream and when she met her fiancé Michael Peoples, he began to push her even more towards realizing her dreams.

“He knew my vision,” Suttles said. “He wanted me to show him the shop I wanted, but I couldn’t do it at first. Finally, I was able to show him and when I got the place, it was a little run down but he and I began working hard on making it look good.”

The two set out to completely revamp the shop, working from the floor, up.

Suttles said it was the fixation on her dream that allowed her to get her success so quickly and encouraged others to stay determined to their dreams.

“If it’s a vision or a dream of yours, then you have to keep going,” Suttles said. “If you don’t, you will regret it. I got my dreams by prayer and hard work and family. You just have to believe.”

It’s time to break out the welcome mat

This is the time of year when Selma really cashes in. This is our busy season, our tourist season, and... read more