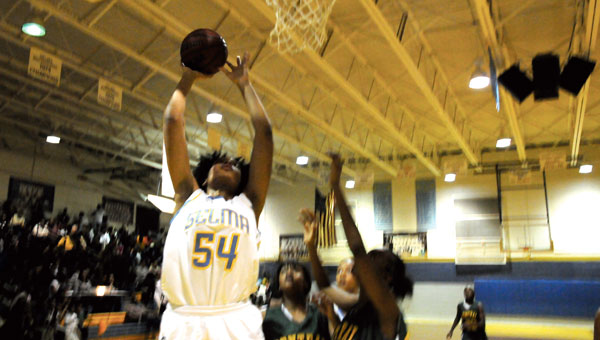 Selma High School started slow, but ended with a flurry in their 67-22 win over Central-Hayneville on Tuesday.

The Lady Saints (25-3) could only put up 8 points in the first quarter, but used a tough defense and some great play from their forwards to pull away.

“We were sloppy to begin with,” said Saints coach Anthony Harris. “You know, sometimes you play teams that are just a little bit less, talent wise than you and you come out slow. I think we kind of did that tonight.”

After the slow start, Selma settled into their game and began getting the ball to the post and senior Breann Smith, who ended with a game-high 25 points to go along with 7 rebounds.

“We like to put in our package with our bigger girls and that is normally our go to when we are struggling,” said Harris. “We were able to turn it up in the second half, but now that we are getting ready for the playoffs, we need to start just as fast as we finished tonight.”

Once they built up a comfortable lead, the Lady Saints began working in their younger players on Senior Night.

“We wanted to give everyone a chance,” Harris said. “But it also gives us a chance to rest up a little more before area play starts Thursday.”

Selma will play at 5:30 in the area playoffs and Harris said there is still a little work to be done.

“We are going to have to be faster,” he said. “If we want to really make a run we have to work on rotating on defense and really playing well on defense. It’s time to get ready. It’s a new season.”